Mustafa Kamal, self acclaimed “World’s Dau Number Mayor”, the verbal flogger and media abuser, will go down in the history of Karachi as the guy who came, who saw and who broke it all.

Apparently he believes that construction begins with destruction. For more than two years he ripped Karachi open from end to end. From Gulistan-e-Johar to Tower and Korangi to Hub, every other road was dug to build flyovers, underpasses, more roads and what not. Billions were wasted on a drainage system that was claimed to be “enough for next 30 years” and we have seen how efficient it was during few hours of rain in Karachi.

While public money was spend on building parks at every available, and occupied, nook and corner, nothing was done for education, sanitation, health, traffic management and general benefit of the public, even for their voters who were following like crazy, adhering to the tunes of Kamal and his God Father in London.

Most recently Mustafa Kamal “Bhai”, whose tenure as City Nazim of Karachi will end in next few days, went to court against the order of Chief Minister Sindh Qaim Ali Shah, whereby Nazims were banned from selling, transferring or allotting government land. Why on earth Kamal is making this an issue when he should be packing his bags, can be anybody’s guess. However, this action (which certainly can not happen without the nod of the guy in London) has pitched PPP and MQM against each other, once again.

Here is how media is reporting this issue: 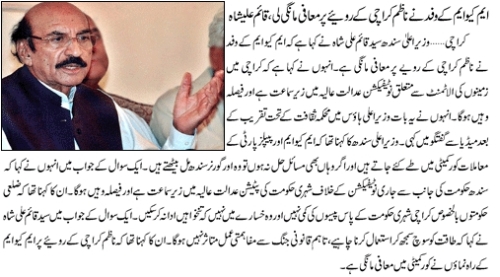 For now, it seems that the unnatural alliance between MQM and PPP is on the verge of a breakup, and if that happens then Karachi will be destabilized and Mustafa Kamal will be blamed as the man who broke it all.

22 thoughts on “Mustafa Kamal: The Man Who Broke It All”