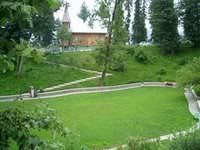 The beauty of Khanspur lies in the light, unlike any other tourist mountain region in Pakistan including Northern Areas. Fiercer, stronger, and sharper light silhouettes the mountain resort and scattered houses on slops in ever-changing patterns against the skyline. The sunlight plays with the green nooks and crags of the Khanspur landscape, tossing out long shadows that ripple across the green gorges, sometimes through tall pine and fir trees. It turns the hills from opal in the morning to sapphire to gold to silver and finally to dross before descending swiftly in a bright red ball in the evening.

It is the light of sculptors, not painters, who love the soft diaphanous hues and tones. Out of that light come the great image of green hills and the long, clean lines of the spurs separating craggy countryside from the plains. In the background of photogenic natural settings, Khanspur weather proves fickle, switching from sunshine to downpour and again to sunshine in minutes. The rain that falls over the land and blots out the sun can be seen in the red, grey and brown layers in the cliffs that plunge dramatically into the horizon.

Of the many spots that lie dotted around Murree, perhaps Khanspur is one of the best. Whereas the beauty in most resorts in this area has been marred by detritus of tourism, one can still have Khanspur to himself because most families coming to beat the heat stay put in Murree. Situated between Murree and Nathia Gali, Khanspur is relatively quiet where one can find privacy as well as unmarred vistas of the green hills together. Away from the hustle and bustle of the life in the fast lane, in Khanspur one can enjoy a sense of solitary elation at that height: to mediate, and have a rendezvous with life. No hurrying up. In the area, one sees mostly older men and women strolling along the contours or working in fields or following fodder-laden donkeys coming down from uphills, repose written all over their faces. Younger ones usually move out to cities in search of better opportunities.

Visible cultural fusion takes place in areas that see heavy tourists’ traffic from all over the country and abroad. Hill-village culture is gradually changing: from plain rustic to urban. Walk on any of the trails interlacing the area, talk to the locals, may be in one of the many makeshift tea houses doing business in nowhere kind of a place or take up any of the serene hikes, and you will find them politically alive and well aware of the hot national and international issues, discussing these in pleasant Punjabi blended with flavours of Potohari and Kashhmiri dialects.

Away from and overlooking Khanspur town, there is a villa-type guest house carved out of the rock that is situated near camping ground. The villa is clean, with sufficiently stocked kitchen, sitting room, bedroom, veranda, and two umbrellas and tables in the courtyard. The setting of the villa — simplicity, intimacy, and environs – is perfect with the fine view in front and the forest behind. If it is just to get away from it all this is the place — to sit in the veranda and daydream or simply count your blessings. But if you are an environmentalist, a short walk out of the room and you are in the middle of the backwoods.

Last time when I was there, the camping ground next to the villa was dotted with tents where young adventurers from mountaineers’ school were camping for training. Early in the morning, I would wake up to similar army-like commands from the nearby camp: “I hope you are ready for a bit of light exercise this morning!” Some instructor would say. “Are you ready?” voice louder this time! “Yes!” Rely in unison. “Okay then. See that “White House” on the other hill? That is where we are going to run. And keep up with me. Ready? Go!” (I became so curious that one afternoon when the boys were out on mountains, I walked up to the place only to find out that the “White House” was a small white speck on the opposite hill, located at a slightly higher altitude, and separated from the camp by a wide valley. I could also view two highest hills, Meranjani and Mukshpuri, over 9000 feet, from there.) Or it would be, “Get down for push ups! Down! Up! Down! Up! Down! Stay down…lower! Up! Down…..Okay, get up! Jump up now! Up! Up! Up! Up! Running on the spot! Go! Faster! Faster! Faster! Down again for push-ups! Down, up, down, stay there, up….. Prepare for sit-ups! Up, down, up…..” What a manly way of greeting wee hour of the morning, I used to think. During the day, they would backpack and go out for climbing and trekking. Other than this morning ritual, I would hear nothing but the noisy chatter of birds.

Geographically, Khanspur is a part of the Ayubia National Park and Reserve Forest. The area is a good example of moist (lesser) Himalayan temperate forest in Pakistan. Terraced agricultural fields are located mostly on valley bottoms. The holdings are very small. Grassland and forest occur on steeper slopes and are proportionally more widespread. Most if not all of the vegetation in and around the Ayubia National Park and Reserve Forest is heavily influenced by the human activities. Apart from collection by locals, firewood from the park is also gathered for use by the hotels and summerhouses.

Other products such as wild fungi and grass are also extracted from the park. The vegetation of the park is dominated by coniferous species, principally pine and fir with scattered individuals of broad-leaved trees, such as oak. Populations of broad-leaved trees are declining rapidly over the years. “This in turn has resulted reduction in the butterfly population. And the drop in butterfly has affected those birds that ate them as prey: yellow-beaked magpie, red-blood and yellow-bodied finches, white chick or crested grey finch, pipits, wagtails, wheatears, chiffchaffs and shrikes,” say biologists. Similarly, the wildlife that thrived in the area in the past has extinguished. Some migratory birds flying from Central Asia to wetlands down the country also pass through this area. How sweet and lonely they look in these hills.

Among the many improvements in physical infrastructure like electricity and roads — those have helped the locals to wake up to a new life and they make these resorts more approachable for tourists — one thing that lacks is concept of sustainable development. I would only mention electric pylons supporting high-tension wires that stand out haphazardly dividing the skyline. They could have been planned better. This is the best area for walking hence flower tracks could have been developed along the garish roads. Elsewhere in the world, communities are keeping pace with the development while keeping their natural environments — the most precious asset of Galyat as the area is commonly called — preserved. Such thoughts never seem to be coming to the planners and decision-makers of the Galyat Development Authority now merged in the Abbotabad Development Authority. Given chance, Galyat could be turned into a nice and rich family recreation area for light rambles for anyone who takes a chance there.

My recomendation: If you have to go to one place (away from conventional Northern Areas) this summer, go to Khanspur.

14 thoughts on “Welcome to Khanspur”