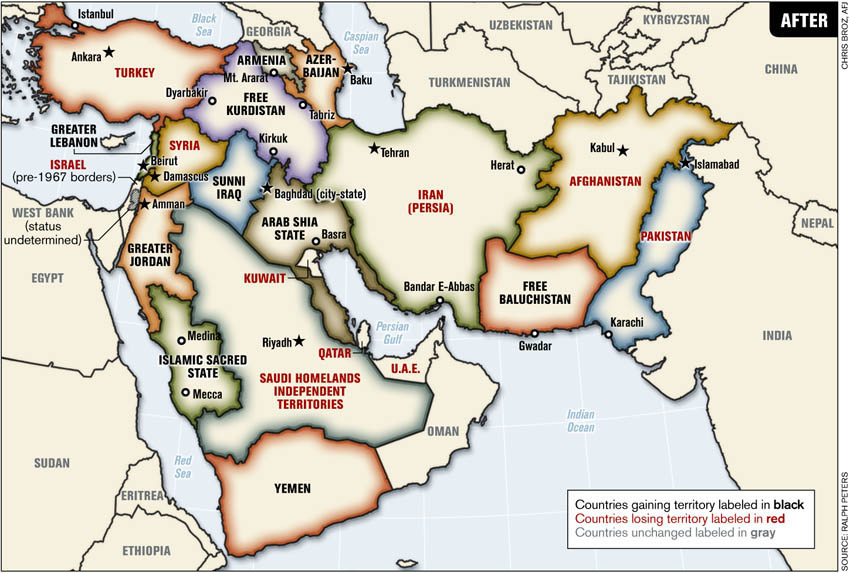 Our media is screaming these days about a map published in Armed Forces Journal that depicts the ‘New Middle East’. This became food for blame-game for the opposition and they started making mountains out of the mole without confirming the authenticity and validity of the map, and it’s creator. 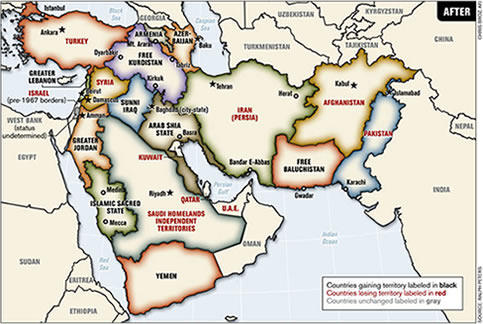 The map was published in an article titled Blood Borders in June 2006 issue of American Forces Journal. Author of this article is Ralph Peters, a retired US army Lieutenant Colonel, novelist and essayist.

Ralph spent ten years in Germany in military intelligence, attended Officer Candidate School and received his commission, eventually attending the Command and General Staff College and U.S. Army War College. His last assignment was to the Office of the Deputy Chief of Staff for Intelligence. He retired in 1998 with the rank of Lieutenant Colonel.

He took up fiction writing after retirement. His novels progressed from futuristic scenarios involving the Red Army to contemporary terrorism and failed state issues. His characters are often presented as military mavericks who have the clairvoyance and courage to tackle problems others can’t or won’t.

Running wild with imagination, Peters came up with his solution for Middle East issues, creating ‘A New Middle East’ based on ethnic division of the region. According to him, the new borders are drawn ‘to reflect the natural ties of blood and faith’, and to undo the great wrongs done by French and English in the 20th century.

Here is how he perceives the Middle East to be:

Israel:
Israel will return to its pre-1967 borders.

Syria: Syria will lose some parts to the new Kurdish state and Greater Lebanon. It may be joined by Iraq’s three Sunni-majority provinces.

Yemen: Yemen will get part of Saudi Arabia

Saudi Arabia: Saudi Arabia will be disintegrated by giving some of its parts to Jordan, forming Islamic Sacred State and a State for the House of Saud. Saudi Arabia’s coastal oil fields will be given to the Shia Arabs who populate that subregion, while a southeastern quadrant would go to Yemen.

House of Saud: Confined to a rump Saudi Homelands Independent Territory around Riyadh.

Iran: The New Persia: Iran would lose a great deal of territory to Unified Azerbaijan, Free Kurdistan, the Arab Shia State and Free Baluchistan, but would gain the provinces around Herat in today’s Afghanistan Ã¢â‚¬â€ a region with a historical and linguistic affinity for Persia. Iran would, in effect, become an ethnic Persian state again, with the most difficult question being whether or not it should keep the port of Bandar Abbas or surrender it to the Arab Shia State.

Afghanistan: What Afghanistan would lose to Persia in the west, it would gain in the east, as Pakistan’s Northwest Frontier tribes would be reunited with their Afghan brethren.

Pakistan: Pakistan will loose Balochistan to the Free Balochistan state and NWFP to Afghanistan. The remaining “natural” Pakistan would lie entirely east of the Indus, except for a westward spur near Karachi.

United Arab Emirates: Part of the Emirates might be incorporated in the Arab Shia State ringing much of the Persian Gulf. Dubai would be allowed to retain its playground status for rich debauchees. Kuwait would remain within its current borders, as would Oman.

WHO WINS, WHO LOSES