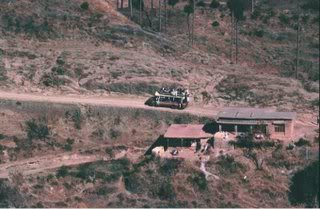 There must be a point at which the sky meets the earth – horizon. Though it is not possible to tell where that point is. Wandering in an expanse of Punjab bordering Azad Kashmir, one can see ahead up to horizon through a blanket of dull light covering the green fields and occasional villages that are spread along the Dina-Mangla-Mirpur Road. Under the sun’s watchful gaze, the valley between Mangla and Mirpur is normally quilted in a hundred different hues of green. Short ride through the valley in very is revealing.

The construction of the Mangla Dam reservoir, one of the baggiest earth filled reservoir in the world, which has a perimeter of 400 Kilometers, has turned into a place of interest and recreation, very restful and clean. A building situated on the lakeside serves as a historical backdrop. My journey to Mirpur started from Mangla Water Sports Club where earlier the speedboat had been ferrying me (and a group of young students from Lahore) across the blue sheet of the artificial lake to its northern extremity. Here somewhere, before the construction of the Dam, the Poonch River coming down from the northeast met with the bigger Jhelum River coming straight down from the north.

The road to Mirpur had recently been resurfaced and even at forty miles per hour, the gravel seemed to take on liquidity under an old vintage and topless jeep we were riding, me on the driving seat. The opposite side of the road was free of chippings but was carpeted with potholes. The lesser of the two evils was to cross over and avoid these littered craters and the occasional oncoming vehicle. Whichever side of the road I choose, there was no refuge from the hail of gravel that rained down on me as the bloated local buses growled on.

With limbs protruding from windows and an eclectic assortment of possessions and sacks of commodities strapped loosely to the roof, these old vintage monsters took on a manic life of their own. Between two dangerously positioned potholes, I shifted down from fourth to third gear with my left heel to accelerate back to my cruising speed. As I twisted with my right hand, I hunched down my head and shoulders in a primitive attempt at streamlining myself against the rushing air. I focused ahead, trying not to contemplate the fatal potential of unavoidable potholes.

What was more, I saw it was about to rain. Rain is no fun to drive in on an open jeep at our country roads, but it did not worry me as much as the dark. Night falls by six o’clock at the time of year I was traveling in this part of the countryside, but that day’s lack of light meant an even earlier dusk. The pothole’s menace was to increase manifolds after the sun set behind the hills.

Now I was in Azad Kashmir (AK). And in AK one can not only see but also feel and smell Kashmir everywhere. The locals are amazing people. Resilient! Many have faced adversities and oppressions in the past for being Muslims and Kashmiris. There are many secrets hidden behind those silent smiles –secrets and strengths. In my experience, the Kashmiri people go to extremes to ensure their hospitality is perfect. I slowed down as I pass a picturesque village — carefully constructed modest and some modern abodes with various kaleidoscopic colors of rustic life.

When the village was almost behind me, we stopped to take photos of the scene. The compass needle of my mind swung and I realized that the track must lead to the river. I share with many others the overpowering urge to take the perfect picture, that one image to sum it up, to capture it all. No need to try to reach for the words, only to lose grip and land on mediocrity. We all decide to leave the road and head down the enigmatic track. The looming threat of the gray sky forgotten, replaced by fantasies of taking photos as evocative and timeless. As we turned left, the road was immediately replaced by a rutted and dusty track. I shifted down to second gear, knowing that balance and acceleration will be of far more use than speed. As I passed the three children from the village on their bicycles, I sounded the horn. Despite six legs pedaling furiously to keep up with me, even at my slowest, I lost them quickly. The track slops downward on gentle gradient, bends and there it is – the road abruptly ends as it is intersected by dark blue running water – the River Jhelum.

Back on Mangla-Mirpur Road, one passes the occasional house and makeshift tea stalls but other than that, all one sees are fields. The low mountains that run some time parallel to the road some time seem straight ahead. I started to feel the odd drops of rain. The drops were becoming more frequent and in a short time, I was under a torrential downpour. As I sat with the jeep in neutral, the options were: head for Mirpur in the rain or remain there and get soaked whilst hoping it stopped. And if it does not stop, riding to Mirpur in the dark and rain and that is the time I wished to sit in a covered vehicle, dry, with wheels planted firmly on the ground and maybe a hot cup of tea in my hands. I quickly purged such thoughts. There was no choice but to keep on. I concentrated so intently on this task that I could not weigh up the situation till without warning the rain ended as abruptly as it had started.

The roads were washed clean and drying following the rainstorm when I entered the town situated at 459 meters above sea level and linked with the Grand Trunk Road at Dina. The town, not so much of a market, is well planned and the buildings are mostly of modern design. Mirpur is developing into an industrial city very rapidly. Textile, vegetable ghee, logging and sawmills, soap, cosmetics, marble, ready-made garments, matches, rosin, turpentine and motorbikes manufacturing industrial units have already been established in the area.

Mirpur comprises partly plain and partly hilly areas. Its hot climate and other geographical conditions closely resemble those of Jhelum and Gujrat, the adjoining districts. The people of this area are farmers. Since the 1960s, a large number of people from this district have gone abroad, especially to the United Kingdom and the Middle East, for economic reasons. As such they are today the major foreign exchange earning source for Azad Kashmir and Pakistan. Around 50,000 people were moved from the area in the mid-sixties to make way for the construction of Mangla Dam. Most of these people settled in new Mirpur whilst some moved elsewhere as far as ‘Walayat’ as United Kingdom is called in this area.

AK is the hinterland one would like to get lost in, exploring slopes, hiking along ridges and riding down the bowls in natural, alpine and pollution free environments. No hurrying up. Maybe any cultural anthropologist can just watch people’s behavior going about little chores of life. Whether it is viewing a family working in fields or watching a young one selling fruit on roadside, “There is much to be learned from non-active participation,” as an anthropologist would say. Or to switch roles, as many will realize in a place like AK, it is actually the traveler that is the one being watched intently by hundreds of curious eyes with so many questions?