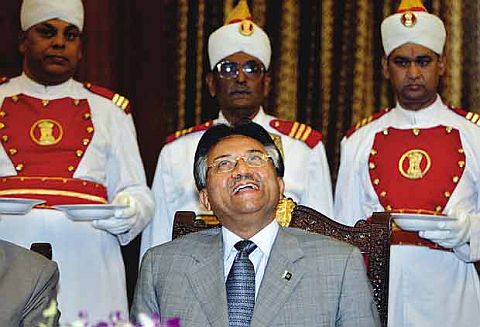 Former President of Pakistan and Ex Army Chief Pervez Musharraf is now living a lavish life in U.K. He has at his disposal the services of, at least, 12 regular officers of the Pakistan Army for his security in London headed by a serving Colonel, Ilyas. The team of officers is deputed at Mr. Musharraf’s luxurious residence situated on the Edgware Road, London, for his security and for providing him daily services. This team is being paid a huge amount per month from the national exchequer.

While the ongoing crisis he is facing and probably article 6 sword over him and rumors of treason charges the protocol Pakistani government is providing him is questionable. He is controversial with his status in Pakistan for sure while the scenario is not beneficial for Army either. It has been speculated also that Army is backing such actions while government is on front foot. Below are some angles of happenings about his protocol.

According Pakistan’s High Commissioner to the UK Wajid Sham-ul-Hassan,

The Pakistan High Commission (HC) in London has been directed by Islamabad to give former dictator General (retd) Pervez Musharraf full protocol of ex-president during his stay in London, and we are bound to act in line with the directions of Islamabad.

According to the rules and regulations of the Pakistan Army, no such protocol was permissible for an ex-Army chief. There was some rule of providing a batman, a PS, a driver and an Army telephone to an Army chief on his retirement But Benazir Bhutto, during her second tenure as prime minister, had ordered the then COAS Jahangir Karamat to withdraw these facilities from Ex Army chiefs and that rule still prevails while no Jawan or officer of the Pakistan Army could be deputed with an Army chief after his retirement for security purposes. Provision of such a facility in a foreign country is simply out of the question.

“Yes, there are some Army officials deputed with Musharraf but according to my knowledge some of them have resigned from their Army positions.”

Now here is a comment from a Pakistani on another forum siasat.pk discussing the same topic.

“I am working at a store on Edgware road where all the corrupt people come for shopping with the money they looted from Pakistan. Musharraf is living on Edgware road in a posh and expensive apartment and he does have an Army office of the colonel rank on his security who comes to our store asking for fresh baked naans (roti) and he is been paid by the Pakistani government from the Poor peoples tax money. He is also enjoying the protocol by the Pak Army and the British Government He seldom comes out coZ afraid of facing the Pakistanis.