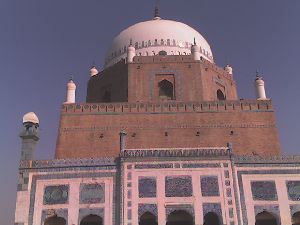 Multan is one of my favourite places to visit. The city is also called ‘Mandinatu-Aulya’, the city of saints. It has tombs, mosques and ‘Khanqahs’ of saints. All these monuments are beautifully decorated and ornamented with blue tiles and mosaic work, and some with the delightful and soothing Kashi and Naqashi work for which Multan is famous. The city has been developed a lot in recent years. Its new residential colonies, Cantonment Market, Askari Park, Holiday Inn Hotel, KFC and Pizza Hut Outlets displays the new lifestyle the city is adopting, however, together they have not at all diminished the grandeur of its history.

The old city exists and the Bazaar exists today. Old Multan was actually a walled city built on a huge ancient mound with six gates set at different places. The six entrances to the old city are; Dault Gate, Bohar Gate and Lahori Gate. Three of these (Dault, Lahori and Pak) Gates have been destroyed while the remaining three are intact. The walled city is densely populated with narrow streets and old style houses.

But the most attractive feature of Multan is the Historical Tombs of great Sufi Saints. Tombs of Hazrat Baha-ud-din Zakariya and the mausoleum of Shah Rukn al-Din Rukn-I- Alam, are known as ‘one the most splendid memorial ever erected in the honour of the dead. 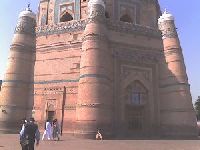 Standing at the northeastern side of the old fort which is situated on the high mound, is the tomb of Shikh-al-Kabir, Bahauddin Abu Mohammed Zakariya Al-Qurashi (R.A). The tomb occupies the centre of a vast oblong open area measuring 260 feet N.S by 203 feet E.W and is enclosed by a perimeters brick wall. It has two main gates one on the east and the other on the West Side. It is said that it belongs to the early decades of the 13th century. The Shaikh died on the 7th of Safar (661/21 December 1262).

The mausoleum of Hazrat Shah Rukn-e-Alam (R.A.) is also situated on the fort mound. The Shaikh was the son of Pir Sadar-Al-Din Arif born at Multan on the 9th of Friday Ramazan 649/26 November 1251. He was the grandson and successor of Shaikh Baha-Al-Din Zakariya.

Shaikh Rukn-i-Alam (Rukn-al-Din) died on the 7th of Friday (735/3 Jamadial-Awwal, January 1335). He was buried in the mausoleum of his grandfather, according to his own will. After sometime, however, his coffin was transferred to the present mausoleum. It was constructed, according to a popular belief, by Ghiyas-al-Din Tughluq (1340-1350) during the days of his governorship of Depalpur, but was given by Feruz Shah Tughluq to the descendents of Shah Rukn-I-Alam for the latter’s burial. The mausoleum of Rukn-I-Alam has been admired by not only the travelers but also by the historians and archaeologist who wrote the architectural history of the subcontinent.

The tomb was built on octagon plan, 90 ft in diameter with walls which are 414 ft high and 13.3 ft thick. As the tomb is standing on a high artificial mound, it is visible from about 45 kilometers. Most of its patterns are geometric-created by arranging the glazed tiles-and a living testimony to creative genius of their designers. The building is also decorated with some floral as well as calligraphic patterns.

The city is well connected with the country through National air, road and rail links. Traveling by Daewoo Express Bus Services is most convenient and comfortable. The city is peaceful and the people of Multan are soft spoken. But Multan is also famous for its hot weather so next time you are planning to go to Southern Punjab, do visit this magnificent city. Choose Winter or Spring season as these are the best times for visiting the city.

12 thoughts on “Multan – City of the Saints”