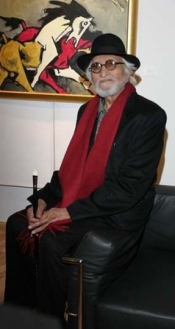 In so-called “secular India” which treats Muslims and other minorities like dirt, the famous creative painter and genius M.F. Hussain was forced to leave his homeland because of threats against his life. His crime, of course, is that he’s a Muslim. Now, after living in self-exile since 2006, he’s been given honorary citizenship by the Islamic government of Qatar. Naturally, he has surrendered his Indian nationality.

All Indians should feel deeply ashamed that their Hindu fundamentalists have virtually taken over their country and are now dictating what is right and what is wrong (not unlike the Taliban, who used to enforce their own beliefs on the hapless people of Afghanistan before they were driven out of power). But of course it has been obvious for long that the so-called secularism of India is a facade. Every Indian Hindu yearns for the day when a Hindu empire will stretch from Afghanistan to Indonesia (as it did in the distant past).

India is a country where Muslims, Sikhs and Christians are routinely slaughtered, and nothing is done to bring the killers to justice. Naturally, M. F, Hussain did the right thing in choosing to flee India and accepting Qatar nationality.