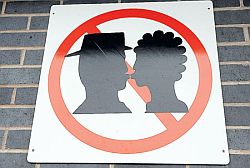 Now let me be clear about this (as Obama would say): I’ve got nothing against kissing, particularly if it’s between men and women. It’s the kissing of men by men that I find offensive, even if it’s done in months other than Ramadan. But the recent publicizing of a case in which a LUMS girl playfully pecked a boy’s cheek (when she thought no one was looking) has again generated adverse publicity for the country (something it could do without). So what happened? Another student hiding somewhere photographed the scene and distributed it throughout the world, which led to LUMS permanently banning kissing of boys by girls (and vice versa).

Of course, the fact that the incident took place during the month of fasting made it worse. You can’t kiss your boyfriend (or even your husband or brother) when you’re fasting, as all of us know. But suppose the two were not fasting? As I just said, they thought they were alone and no one could see what they were doing. I agree that kissing in public cannot be tolerated by the average Pakistani, who in any case is terribly disturbed whenever he sees a woman (especially if she’s not covered by a burqa).

However, I don’t mind it when a man kisses his wife or his daughter at the airport when one of them is leaving the country. That kind of thing happens all the time (sometimes even at railway stations). But LUMS should also have banned kissing between men and men (and also between girls and girls, since I assume there are some females who would find it terribly offensive). In the meantime Iâ€™m waiting for some Saudi/Waziristan mullah to issue a fatwa banning kissing between husbands and wives even when theyâ€™re alone in their bedrooms.

56 thoughts on “Kissing banned by LUMS”