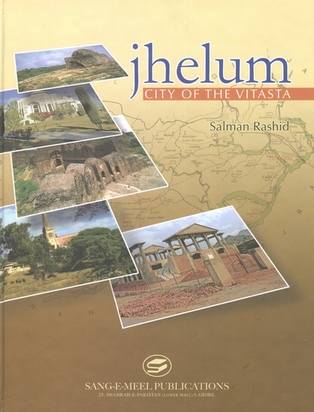 Salman Rashid’s “Jhelum: City of the Vitasta” is a worthy, lively, and very well-researched book that entertains as well as informs. It richly succeeds in uncovering the truth about the name of the ancient town and smashing unfounded legends while bringing an evolution vividly to life in the process.

Where has the name Jhelum come from? Salman Rashid writes, “Local ‘historians’ were assiduously applied to the task of inventing history. Sometime since the first European historian did his research in the area and the present, ‘Jhelum’ had become the name of Alexander’s horse. I was surprised to discover locally printed histories carrying on and on about famous horse that dies at Jhelum and gave the town its name. All of these so called histories have been printed in the last thirty or so years which implies that this industry of pseudo-history became fashionable in the recent past.”

From ‘an ordinary village’ Jhelum city came of age during the British Raj. “Two things are evident, One, that Jhelum never matured as a trading town, that whatever scant merchandises could be seen in its bazaars was the leavings of the limited trade transiting through here. Secondly, in the presence of the busier ferries of Jalalpur, Haranpur and, even despite its bitter ground water, Pind Dadan Khan, Jhelum was the less preferred crossing point. Indeed, at the point of annexation in 1849 by the British, the town contained only five hundred houses. That is, its population was not much above three thousand souls. A far cry from a rich and prosperous town,” narrates Salman Rashid.

Jhelum district lies on the route that was taken by all conquerors and invaders coming from the north. Journeying back and forth through history, Salman Rashid narrates the interesting tales the District has to tell from Alexander era, to Mughal period and British Raj.

The book is based upon the study of history of the district and its people, which is then backed upon by field notes and incisive observations. The writer also documents the history woven around Fort Rohtas and Till Balanath (Tilla Jogi) and how important was Jehlum on the Railway Map or for the timber trade.

Salman Rashid is a famous travel-writer of Pakistan. Remember TV Serial Nagri Nagri Ghum Musafar. He is writing in the major English language newspapers and magazines of the country. As a travel writer he has the talent George Orwell spotted in Dickens as a novelist, for details, florid little squiggles. Since 1983 when he discovered his ability to tell a tale, he has written countless articles, and has six books including Prisoner on the Bus, The Salt Range and the Potohar Plateau, Gujranwala, the glory that was, Riders on the wind. Sarwat Ali once wrote, “He draws his inspiration from the writers of history who treated their subject as a grand denouement of a dramatic plot with historical personages as characters. He is thus far away from those academic historians who establish a thesis and then laboriously fill in data to prove their assumptions.”

“Salman Rashid is not a historian, neither is he a social scientist; he basically loves to write about places and people with the zest and passion that is more the forte of creative writing. This strength can easily turn into a flaw, but he knows when to stop and puts an end to the surge of passion before it freewheels from the umbilical cord of history into fantasy.”

Accompanied by dozens of images, hundred of interviews with those who carry the lore (also myths and legends) and sifting heresy from what are the substantiated facts, and as a result of many visits to the dusty old record rooms, Salman Rashid’s book is much more than a history; it is a heartfelt chronicle that evokes the atmosphere of a Jhelum district that is distinctly ancient.

Jhelum: City of the Vitasta is a mosaic of history, archeology, geography, folklore and travelogue. The book is a must read for those searching for the answers to riddles in history. Jhelum: City of the Vitasta is a smooth and enjoyable trip to the boardwalk, and is densely packed with facts and details for historians everywhere. Well-written and wonderfully presented, the book belongs on the shelf of anyone interested in subcontinent history starting from Alexander’s days. I highly recommend it.