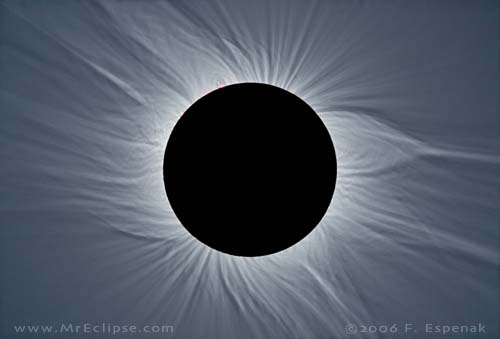 Wednesday 22nd July, 2009 mankind will witness the longest total solar eclipse that will occur in the twenty-first century.

What is Solar Eclipse?

The sun’s diameter is 400 times larger than that of the moon, and at the same time, it is 400 times as far away. From where we are, this creates the illusion that they are the same size. If we look through a filter at the sun, it looks exactly like the moon on a full moon night. When the moon passes in front of the sun, the shadow falls on the earth and it appears to exactly cover the sun’s disc. This is what a solar eclipse is – a shadow.

During a solar eclipse, the moon actually casts two shadows towards earth. One shadow shaped like a cone is called the umbra, which becomes narrower as it reaches the earth. No direct sunlight penetrates into this path. This area that is covered by the umbra is called ‘the path of totality’. If you are positioned in this area than you can see a complete blocking of the sun and view a total solar eclipse. Total eclipse is observable only within a narrow strip of land or sea over which the umbra passes.

The second shadow is called the penumbra which spreads out as it reaches the earth. It is the outer cone of partial shadow which diverges instead of shrinking. The penumbra is spread over a large area. People viewing the eclipse from this area of the earth’s surface will see only a partial blocking of the sun.

The solar eclipse that will take place on Wednesday, July 22, 2009 will be a total eclipse of the Sun.

There are a lot of superstitions attached with eclipses that are not true. An eclipse in itself is quite harmless. However, solar eclipse only occurs at New Moon. This is usually the time when black magicians and their like practice new sorcery whatever the aim may be. They believe new moon is the time when evil gathers and they call upon it to aid them in their work. Solar eclipse is when evil reaches its optimum level according to practitioners of dark deeds.

Performing any kind of magic, black or white, is strictly forbidden in Islam. It is one the Major Sins in Islam*.

I don’t know much about the kind of magic practiced during this time, but I have heard from a lot of people about its ‘significance’. This is specially an important event for the Hindus. (You may visit the link, but it doesn’t make too much sense to me. I guess one has to first acquaint themselves with their terminology.)

The point here is not to ponder over the kind of wrong deeds practiced at this time but how to save ourselves from evil of all sorts. It is highly recommended that one does a lot of adhkaar, especially on that day (one should make a habit of it everyday).

Recite Al-Qur’an Al-Hakeem as much as possible. It is highly recommended to recite Surah Nuh. After reading its translation one would understand its importance in this regard.

The world is filled with evil-doers. So it will be. Our shield is our Deen. May Allah protect all Muslims (i mean Muslims) from all evil, ameen!

*For Further Reference About Major Sins In Islam, Please Read The Book ‘The Book Of Major Sins’ by Imam Muhammad Ibn Abdul Wahhab.