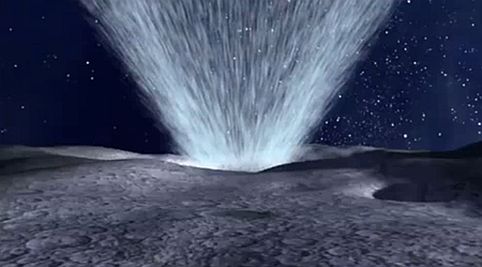 From an analysis of data from a spacecraft LCROSS (Lunar Crater Observation and Sensing Satellite), intentionally crashed into the permanently shadowed crater Cabeus on the moon’s South Pole last month, its evident and now officially announced by NASA that moon has significant amount of water. Scientist has been waiting for this discovery for many years since they got some signs of buried ice and hydrogen on moon.

“Indeed, yes, we found water. And we didn’t find just a little bit, we found a significant amount. The lunar impact kicked up at least 25 gallons of water and that’s only what scientists can see,” said Anthony Colaprete, the mission’s principal investigator at NASA’s Ames Research Center.

Having an abundance of water on the moon would make it easier to set up a base camp for astronauts by providing drinking water and an ingredient for rocket fuel. The latest finding is further evidence that the moon is not the dry, barren and could reinvigorate scientific interest.

I always wonder why such a huge amount of money is being wasted for finding signs of life in the universe other than earth while still we are unable to provide basic necessities of life for human beings living on earth. Is this curiosity regarding universe neighbors more important than our own neighbors whom we don’t have time to even bother about. The super powers should try to find some resources and conservation of water on earth to save human race in future rather than spending time and a hell lot of money to research about moon and its water content.

It is worth mentioning that it has been claimed that Indians first found the evidence of water on the Moon in their first ever lunar mission named Chandrayaan-1 in Sept 2009. NASA quickly geared up and sent another probe after getting this news and now with a great bang advertising this story that water is found at moon. It is sad that Indian government investing money to find moon water when large number of people are still looking for water in India. Not only in India globally water shortage is a problem but will moon water is a solution for us?

14 thoughts on “Evidence of Significant Moon Water by NASA”