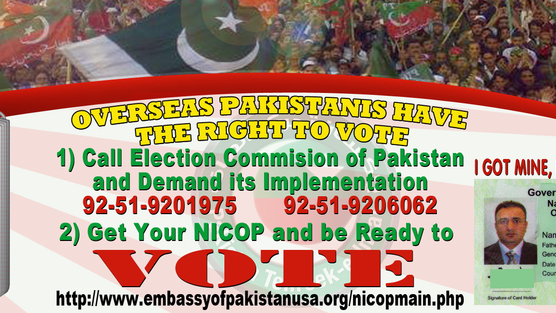 The Election Commission of Pakistan (ECP) has ruled out any possibility for overseas Pakistanis to vote in upcoming Elections, saying that proper mechanism and legislation were essential prerequisites.

Without making necessary legislation, enabling on-resident Pakistanis to vote in the forthcoming elections would compromise the transparency of the election process, the ECP said in a report submitted to the Supreme Court.
The report pointed out that any hasty decision over the matter may compromise the transparency of the polls and may prove damaging.

The Supreme Court had recently asked secretaries of law and justice, information technology, foreign affairs, ministry of oversees Pakistanis and the ECP as well as the chairman of National Database and Registration Authority (NADRA) to make coordinated efforts for devising a voting mechanism for nationals residing abroad. Late last month, NADRA said it has devised an electronic software for voting by overseas Pakistanis. It later informed the court and the ECP of the details regarding the software.

Registered Pakistani voters living overseas: According to official data, there are 4.5 million overseas Pakistanis enrolled as eligible voters, including: