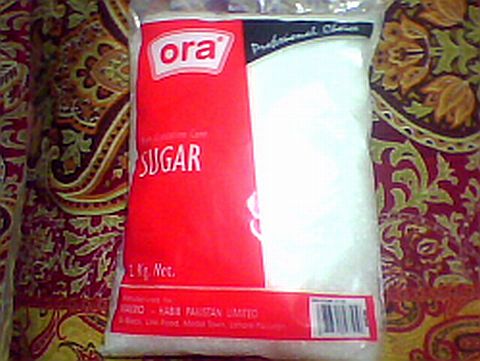 Now days Pakistan is almost sugar less because of ongoing sugar crisis. The hoarders, mill owners and government officials have made our lives unsweetened. In an agricultural country where sugar cane is a major crop it is strange how the crisis shaped up. Its dearth in the market has made sugar such a commodity which even neighbors don’t want to bestow each other.

In spite of the Supreme courts price fixture of Rs 40 per Kg it has been sold at a rate of around Rs 60 to 80 per Kg. Utility stores are also failed to provide enough amount and low rate sugar for the customers. Hoarding has been done by big stores like Makro. When I was shopping few days back at Makro star gate there was no sugar at display. Upon inquiring they said sugar is available at Rs 62 per kg. I purchased it and they had provided me a separate bill of it. While I was exiting the sales person took the sugar bill from me and said that we are not allowed to let the customers go out with this bill. I protest that I had paid for it and bill has to be provided but he apologizes which made me think that they are black marketing it. The sugar bag has been printed by Makro Habib limited by the brand name “ora” which is not available any where else in the market. Such huge super markets can help the government by reducing prices but customer care is secondary thing.

Whether called self marketing or publicity stunt by some it is commendable that ARY Network took the initiative to raise voice against sugar price hike and hoarding. A week ago they had launched “Cheeni boycott” campaign with a tag line ‘ek koshish (an effort)’ to urge people not to use sugar so that the prices drop. The culinary channel of this network is not showing any sweet dish recipe and broadcasting public service messages by celebrities to support this campaign. The impact of this campaign is a question but effort like this should be appreciated as it is at least making some noise.