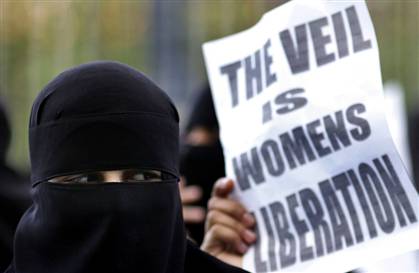 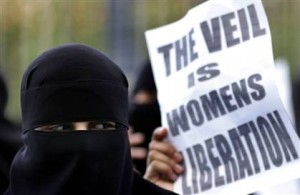 I do not believe in force in Islam, so I don’t believe that any woman should be forced to wear the burka. At the samel time, the majority of women who wear it choose to do so. However, if a woman is seen in a burka, it is automatically assumed that she is oppressed and has been forced to wear it.

There is a lot of stereotyping and hypocrisy by people who look down at the burka. If a woman wears a miniskirt, it is a choice, but if she wears a burka, it is forced.

If a woman exposes her body, that is okay, but if she hides it, it is not. If a woman covers up to save herself from the lustful gazes of men, she is forced. But if she wears next to nothing, and is degraded to the level of a commercial product where beauty, fashion, and diet industries exploit her, it is by choice.

Lets see if it is really a choice.

What about the obsession with plastic surgery. Billions of dollars are spent on it annually. What is alarming is that even beautiful, young girls are going for it. The message that is sent to them is that natural beauty is not enough. There are girls unnecessarily lining up for breast implants, whose occasional leakage leaves some of them with far greater beauty defects. Women are going for everything, from nose jobs to liposuction, and no one raises an eyebrow.

Teenage pregnancies is also a big issue these days. It is not rampant in the subcontinent because girls in the subcontinent are forced. It is only rampant in countries where girls have the choice to become pregnant while still teenagers. They are called names, taunted by their friends, have to miss school, suffer from a poor self-image, and a list of other problems that accompany teenage pregnancies.

A lot of modern girls believe in constant dieting, which is accompanied by depression, bulimia, anorexia, and all the disorders that go along with having a low self-esteem because they cannot have the perfect body. So why do perfectly normal girls go on a diet? They go on a diet because dieting industries have changed the definition of normal. Unless a girl is all skin and bone she is ugly, fat, and unattractive. They advertise ruthlessly, targeting girls into believing their satanic schemes, wanting to earn money in any way or form.

Modern girls today are slaves of fashion, used like puppets by industries, turned into sexual objects, brainwashed with false ideas about beauty, used as a commodity, diet themselves to death, and then people say that it is by choice.

3 thoughts on “Burka Ban In France, Feminism and Women Enslavement”