Wow. Another starrer from shining India. On one hand the slum dogs of Mumbai become millionaire by selling their kids or renting their wombs for foreigners, rich men from abroad chose India to build their harem. 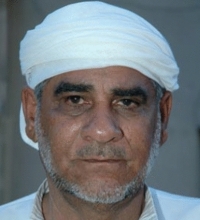 According to a report in UAE newspaper, 64-year-old Daad Murad Abdul Rahman of Ajman, father of 88 children, will marry 18-year-old Aisha in Jaipur (Indian state of Rajastan) after Eid. He aims to hit a century of offspring before 2015. Aisha will be his 16th wife.

Speaking to Emirates24|7, Rahman said: “The wedding was arranged by his Indian doctor. Meher [money bridegroom pays the bride’s father] has been fixed at Dh20,000 and the nikkah [wedding] will be held in Jaipur.”

Rahman, who lives in Ajman and Manama, has 50 boys and 38 girls. The eldest son Tariq is 39 years of age and the youngest is a few months old. “I will stop marrying when I have 100 children. I hope to achieve that with this marriage.”

The sexagenarian could not conceal his excitement when asked about his new bride. â€œI’m thrilled about my wedding. She is a pretty girl. I have seen her photograph. I speak to her over the phone. I have applied for visa to visit India for the marriage. Most probably, I will leave for India after Eid.”

“Every marriage is a celebration in our family as children get new clothes, sweets and gifts. We will have to cut at least four sheep for the festivities. I will bring the new bride to Ajman a few weeks after the marriage,” he added.

Rahman gets pension from the UAE Armed Forces, financial aid and other benefits such as free homes from the government. His family comprising 127 members live in seven homes spread across different emirates. Most of his children are employed in good positions (UAE Armed Forces, Police, etc). One of them is a businessman in the UK.

Rahman says he has been married 15 times. However, he has only three wives at present and the rest are divorced. Some of his ex-wives, however, still stay with him.