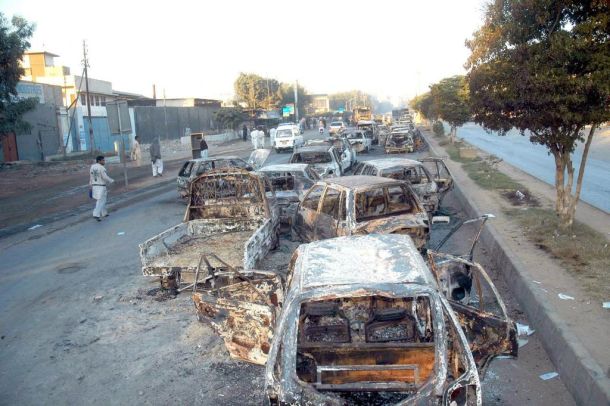 Death is inevitable. Death can not be avoided inspite of bodyguards, bullet-proof vehicles, security cordons, jammers and other preventive measures. Benazir Bhutto’s time had come which tempted her to stand up in sun-roof of her vehicle. Whether she was killed by a bullet, a shrapnel from the suicide blast or got hit in head by sun-roof, the undeniable reality is that she is dead now and nobody can do anything about it. However, what the government and PPP leaders can do is damage control. PPP supporters are mad with rage and grief, and very rightly so. They have lost their sister, their Bhutto. In their pain, they feel everybody is against them and they are expressing their frustration by burning and damaging the world around them.

It is prime responsibility of the government to maintain peace and keep its citizens and their properties secure. However, we have noticed time and again that the administration has miserably failed in this task. Starting hours after her death, riots spread across Pakistan. Although Benazir Bhutto was killed in Rawalpindi, Sindh got heavily affected by the aftershocks. Karachi, Hyderabad, Sukkur, Coterie, Ghotki, Jacobabad, Larkana, Mirpur Khas, Noushero Feroze, Tundo Jam, Tundo Adam, Dadu, fall prey to violent mobs who burned vehicles, trains, petrol pumps, banks, hospitals and houses, looted factories, stores and shopping centers. All this was happening while Police and other “law enforcement” agencies were kept at bay. In Karachi, Police was asked to stay inside police stations while Rangers were safely in their barracks. Maybe, the administration thought protesters will vanish once they vent out their frustrations, and they proved incorrect, as usual.

After giving a field day to mobsters, Rangers and Army were brought in Karachi and other parts of Sindh. However, riots are still going on. Karachi’s road-links with other parts of the country are disconnected as protesters have occupied Super Highway and National Highway. Vegetables, fruits, milk and other essentials are not coming in. Milk sellers have to waste 50 tons of milk as they were unable to supply to retailers.

People are getting the feeling that now any group of few hundred hooligans can take the country hostage. It seems that our Police, who enjoys beating unarmed lawyers, journalists, students and civil society activists, is unable to face real miscreants and terrorists.