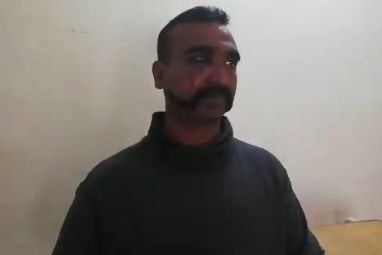 Wing Commander Abhinandan Varthaman, pilot of the Mirage 21 Bison jet which was shot down in Pakistan territory and captured by Pakistan Army, says he is satisfied with behavior of Pakistan Army with him and expect his country to do the same.

#Video: Statement of Wing Commander Abhi Nandan, who in custody, says that Pakistan army has treated him well, they are thorough gentlemen and â€˜impressedâ€™ by them. pic.twitter.com/cbRowMurFK

According to reports, the detained Indian pilot is said to be the son of a retired Air Marshall and was flying an MiG 21 Bison jet that was shot down by Pakistan Air Force (PAF) and he was taken into custody.

Soon after the attack, a footage of the captive being questioned was also released where he can be heard saying: â€œMy name is Wing Commander Abhinandan and my service number is 27981.â€