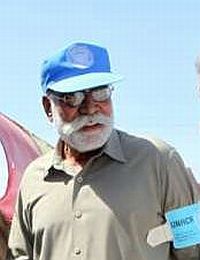 UNHCR Senior National staffer Zill-e-Usman was on a routine visit to the Kacha Ghari camp when, four armed men came out of a car and tried to overpower Zill-e-Usman and when he put up resistance they opened fire. The guard named Alladin opened fire on the attackers but missed them and was injured along with UNHCR repatriation clerk Ishfaq Ahmed while Zille Usman died on the spot. At the same time, dozens of buses packed with IDPs and loaded up with suitcases, electric fans, and government rations of flour and sugar left from another camp an hour away in Mardan. The biggest question mark remains whether the region is really pacified enough for civilians.

The killing was the third of a UNHCR staff member in Pakistan in the past six months. On June 9, staff member Aleksandar Vorkapic died in the bombing of the Pearl Continental hotel in Peshawar; on 2 February, Syed Hashim, UNHCR senior driver, was killed in the kidnapping of John Solecki, head of the Quetta office, who was later released.

Zill-e Usman, 59, father of four, was a well-respected member of the local community and one of UNHCR’s most senior national staff members in Pakistan. He joined the UNHCR Peshawar office in 1984. At the time of the incident, he was working on the repatriation of people displaced by a conflict in Pakistan’s tribal areas that broke out in August 2008.

“We as a nation are devastated by this irrational loss and convey our deepest condolences to his family. His sincere efforts and dedication can never be forgotten by Pakistani nation. There is no justification for attacks on humanitarian workers dedicated to the protection and care of the most vulnerable people. It is unacceptable that humanitarian workers doing such vital and selfless work are attacked in this way,”

4 thoughts on “UN official killed in Peshawar, A question of IDPs Security”