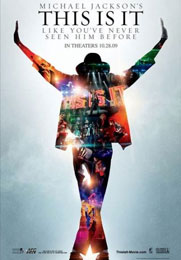 Michael Jackson may be headed to the top of the charts again four months after his sudden death, in a film on his final days which has opened around the globe. The movie called “This Is It” will play for two weeks only but may be extended. Michael Jackson’s â€œThis is itâ€ took in $2.2 million domestically from its first late-night screenings. The film has been distilled from more than 100 hours of footage shot as Jackson rehearsed for what would have been a 50-concert comeback run in London starting last July. The movie is like a little backstage pass, a private peak into a creative process of a great genius.

In the film, now stands as a final curtain call, Michael Jackson is candid about himself and his show, and the movie, as advertised, is stitched together from snippets of audition, rehearsal and behind-the-scenes footage. Some of the video is rough, some polished. Interviews with back-up dancers and costume designers occasionally help piece the material together.

As for the music, performances of â€œYou Gotta Be Starting Somethingâ€ and â€œIâ€™ll Be Thereâ€ were included, as well as, of course, a 3-D rendition of â€œThrillerâ€ and other oldies Jackson thought â€œhis fans wanted to hear,â€ as he said at the press conference announcing the original tour.

Even before the “This Is It” opening, Michael Jackson had earned $90 million in the past year, with most of it coming since his death four months ago. That substantial sum put him third on the Forbes list of (delebs) dead celebrities making the most money. Forbes counted money earned from October 2008-October 2009, even for Jackson, who died June 25. But about $72 million or 80% of the $90 million earned in the past 12 months came after Jackson’s death.

On its opening day worldwide, the film topped the box office, raking in $66.6 million. But it’s not only about money. The movie reaffirms Jackson’s genius and gives a glimpse of his comeback, had there been one. Fan or no fan, one leaves the theater heartbroken at the loss.
It also became a trending topic on popular social networking site Twitter, with some of the people that were at the movie, tweeting their favorite bits of the film using the words as typed #ThisIsIt â€“ as a sign that those were anecdotes from the film.