The future of approximately 3,800 students and 525 teaching and non-teaching staff of the Yaqeen Model School System (YMSS) are at stake, as the major school project is said to be in doldrums after the school chairman fled overseas. The YMSS offered O level and Matriculation-based education as well as Madressa [Hifz] schooling to the students and had earned a good reputation among the teachers, students, parents and other stake holders ever since it was launched in 1994 at Dhorajee and Tipu Sultan Road, Karachi. Later, YMSS expanded to nine operational branches. However, only three of the buildings were registered with the concerned authorities. Parents were paying Rs2,000 to Rs2,500 per month as tuition fees to the schools as well as Rs 20,000 security deposits at the time of admission.

According to media reports, School Chairman, former Adviser on Islamic Finance,Syed Muhammad Hussain has allegedly committed fraud at a large scale, did not pay a single rupee to the teachers and non-teaching staff for the past few months and has fled to Canada. It has also been reported (although not confirmed) that Syed Muhammad Hussain is seriously ill in Canada and could not return soon.

As no statement from the owner is available, it can be assumed that it might be a takeover attempt by employees done in his absence. Daily Ummat reported that some of the branches of school have been taken over by the administration and they had changed the School name. Like the branch located in Gulshan-e-Iqbal has now been renamed as “Hira School”.

One of the major stakeholders, Javed Masood, a businessman, has taken over a school situated in PECHS and another located in North Nazimabad. He had individually paid more than Rs6.2 million in lieu of dues to the teachers and non-teaching staff and also informed them that he would pay the remaining amount as soon as possible.

Mufti Muhammad Din, Imam of Bilal Mosque, located at Main Abul Hasan Ispahani Road and Principal of Quran School, Boys Section had said that he would also pay the dues in the future. He was hired on Rs50,000 per month salary to run the Quran School administration and now he had taken charge of the said branch on his own under the name ” Madressah tul Uloom”.

The owners of Dhorajee Campus, Muhammad Aamir and Imran, two brothers who run their businesses in Dubai, had hired Major Mehtab Alam and Commander Ghulam Abbas to look after the affairs of the school. Both retired army personnel were allegedly involved in cheating the YMSS in the past and now they have full control over the administration of the said campus. On July 16, when the then administration at YMSS fired all the staff without any intimation, Maj Alam came forward and asked the employees to agree on the handing over of four campuses to the existing administration and for their cooperation he would give them four months’ salary. Unfortunately, many people signed the deal but did not get any amount and their dues for the past three-four months are still not clear. 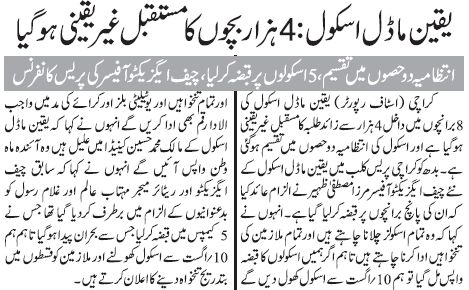 Chief Executive Officer (CEO) of Yaqeen Model School System (YMSS), Mirza Mustafa Zaheer, held a press conference last week at Karachi Press Club. He arrived along with his legal advisor Ali Nawaz and Javed Masood, owner of a YMSS campus located in North Nazimabad, to give his point of view over the current situation of YMSS. The CEO said that;

“Chairman YMSS Syed Muhammad Hussain has not left the country. He is in Canada for some medical reasons and he would definitely come back to take charge of his school system. Taking advantage of his (chairman’s) absence several former employees have illegally occupied some campusesâ€.

He further added that the school will re open from 10th of August and will be operational on wards but sadly it couldn’t happen.

As the whole situation is twisted and owner’s view point is not available the truth is still hidden. Here are some comments from the School staff and students responding to the news of YMSS downfall.

Committee constituted by Director of Private Institutions, Sindh, Mansoob Siddiqui to probe the Yaqeen Model School System (YMSS) matter has recommended that the head office of YMSS be sealed and all the bank transactions between YMSS and building owners be checked in order to verify the allegations levelled by the building owners. The government should arrest people currently working, or who had worked, in the top positions at YMSS to probe the matter and fix responsibility. Besides this, administrators should be given control of each campus of the schooling system so that students and teachers do not suffer anymore. The committee also found that Rs0.54 million were deposited in a local bank and the same were collected from students in lieu of security deposit at one campus only as reported by The News.

A legislation and code of conduct for the operational private schools and institutions is the need of time. There should be a check on the activities of administration and the amount which had been charged for educational services. Director of Private Institutions needs to be efficient in this regard and unregistered schools should be fined. To open a private school should be a hard nut to crack in future to avoid such frauds.

Chowrangi welcomes all students, parents, teachers and staff of Yaqeen Model School System to share their views on this issue. Government, especially Sindh Education Department is requested to play its role. It is vital to excavate the root cause and respond to the disaster that has been affecting the educational future of thousands of students.

242 thoughts on “The Demise of Yaqeen Model School System”