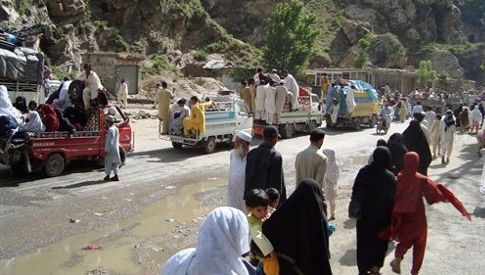 Undoubtedly, if the current crisis would have occurred in any other place, the inhabitants either had buried themselves up or they would have flocked outside the embassies of foreign mission, begging for asylum. But in reality, its Pakistan, where against all odds, no one leaves faith and hope disappear. Yes I am talking about the flood of IDPs that has come from the beautiful valleys of Swat, Buner, Mingora, Bajaur etc. Its simple to say but 1.3 million is a mighty number, and that too in a matter of weeks.

But again I would say, its Pakistan where Nation unites whenever they are tested. I have dedicated my today’s article only to this brave nation, which is in the eye of the storm, but no force can move it from its foundation. This is not the first time we are faced with a crisis like this, we were born in a scenario not different from this. It was 1947 and the migrants from all parts of sub-continent have diverged on this pure land. Yet in a matter of few months, they all wee settled and we were through our first test with flying colors. We were again tested on our faith, when our neighboring Muslim state of Afghanistan was under siege. This time the crisis was more severe, as we had to accommodate nearly 3-4million refugees. Yet, we prevailed and they stayed here with all they desired for. Iran was also there, but it was never out there to play the role, Pakistan did.

Then came the earthquake of 8th October, 2005. It was a disaster never seen in the history of Pakistan. Well the outside help did came, and I must say it was immense, but even they knew that Pakistanis from all part of the world were there first, helping in any possible way they could, and that sacrifice is still young in our memories.

With this preview, we are tested yet again. Though the situation is more complex, the spirit is more stronger than before. Whether it’s the fight against self proclaimed Taliban or the help of IDPs, every single Pakistani is more than determined. Though this crisis is hardly one week old, already the determination has made it clear that we will not let ourselves go into history book as a failed state. We will fight till the end, and we will sacrifice till the end. Those coming out of the valley have chosen Pakistan, even in there flight from there native areas. I say this because they have refused to bow down to the hostile agenda, and made there protest registered.

This is a long fight, and don’t expect this episode to be over in weeks. If Bhutto could boast that my nation will eat grass but will defend itself with nuclear arsenal, let us make this fact evident on ourselves that we will not abandon them, as they have looked toward us in this hour of need. Till yesterday, they were not much different from us, with a peaceful and prosperous life. Let us assure them, that if they have no electricity in this summer, neither will we consider it as an option. If they have been left starving, neither will we have our meals. Let us prove once and for all, that every Pakistani stands on this notion,
“One for all, and all for one”

4 thoughts on “Swat IDP Crisis: We Will Prevail, No Matter How Hard It Is!”