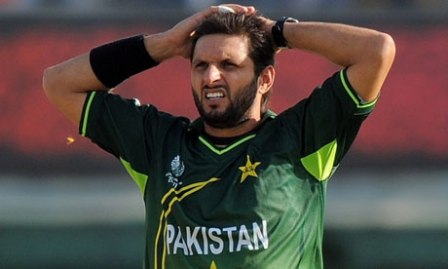 For Pakistan Cricket another sad demise after astounding fast bowler Shoaib Akhtar is the flamboyant, controversial and aggressive Boom Boom Shahid Khan Afridiâ€™s retirement. What would it be like when there will be no chants and placards in the stadium applauding probably the liveliest cricketer ever? Deserted isnâ€™t it. It is indeed heartbreaking news for Boom boom fans and the saddest part is the actions of Pakistan Cricket Board against him rather than showing concerns over his grievances for the team.

PCB not only suspended Afridiâ€™s Central contract & all payments but also canceled the No Objection Certificate (NOC) preventing him to play for Hampshire county and opening edition of Sri Lankan Premier League. He has also been spanked with a show-cause notice for announcing retirement in protest against the Board accusing it of humiliating him and making his differences with Coach Waqar Younus public.

Fans in Pakistan are thwarted over his sudden decision and now on PCBâ€™s action. The iconic, hard hitting all rounder had won rave reviews for uniting Pakistan after last yearâ€™s spot-fixing scandal and taking them to the World Cup semis. Pakistan cricket board has mishandled the issue completely and is responsible for this loss to Pakistan cricket.

In a statement according to Daily Jang, PCB Chairman Ijaz Butt has said that If Afridi doesnâ€™t want play under current cricket board than there is nothing we could do. I accept his retirement.

I wonder is there any authority in Pakistan to monitor the performance of PCB and in front of whom Mr. Ijaz Butt is accountable? Why Misbah ul Haq is so dear to coach Waqar Younus and management that cricket board reverses its decisions of nominating captain every now and then.

I want Afridi back as the captain of Pakistan ODI and T20 team at least for the next 5 years. Pakistan cricket board needs a serious overhaul and a regulatory body to monitor not only its performance but to listen to the playerâ€™s perspective.