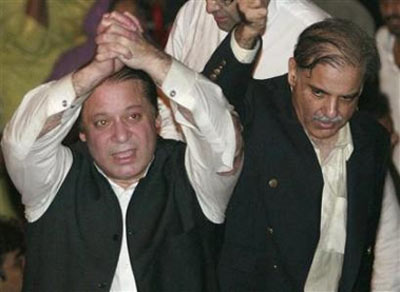 It seems that all the success is depositing into the basket of Nawaz and Shahbaz. Supreme Court today cleared both of them in the eligibility case, and now Nawaz is all set to launch himself into the mainstream politics. The twice PM was barred from contesting in feb 18,2008 election after General Musharraf assigned PCO judges disqualified him.

This is no less than a relief for many, as no one wants a political confrontation at this time. But success comes with responsibility, and its time that Mr Sharif proves that he has parted way with the politics of the past. More recently, both him and his party were somewhat shaky on many issues, but with him back in the playing field, it is believed that things will move in a positive direction.

At this time, the government, faced by the mounting task of uprooting and countering extremism, will need both the Sharif’s to be aboard on there side.

1 thought on “Sharifs Are Back — With A Bang”