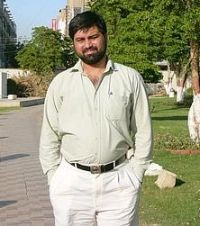 Dark clouds have lowered down on the journalist community of Pakistan, as well as the global network with the shocking murder of Saleem Shahzad, a top line investigative journalist from Pakistan. Saleem, maintained a low profile as far as the main stream electronic media is concerned, but his connection and insight into Al Qaeda, Taliban and other militant organization inside and outside Pakistan were matchless. A dedicated journalist to the core, Â Shahzad was known for exploring the frontiers which usually remain on the â€œgrey sideâ€ of reporting.

His loss has been immense, and the journalist community has lost one of its own in the most gruesome manner. His murder itself is a mystery much like the stories he use to follow. His last story about Al Qaedaâ€™s possible onslaught against Pakistan Navy has been termed as a decisive link to his murder. Very well placed journalists and Human Right activists have pointed their fingers toward the role of some agency behind his murder, but is the case is monitored from multiple angles it becomes highly unlikely that this was an act of the agency being labeled for this barbaric act. His story regarding Navyâ€™s arrest of personnel linked to Al Qaeda and PNS Mehran being its reaction can be valid, but why would it irk the â€œthree letterâ€ supreme agency of Pakistan?

If the Navy has arrested a few of its servicemen for their alleged links to militant groups and has ignored Al Qaedaâ€™s ultimatum for their release, there is nothing to be ashamed of. 1st by not appeasing Al Qaeda they have dared to challenge this unseen lethal force while on the other hand recently when an ex-commando of Navy was arrested for providing maps of PNS Mehran to terrorist, the news was on media screens in an instant which shows that ignoring black sheepâ€™s is something an institution will fear, not exposing or capturing them.

There can be another possible reason for his murder. What if Saleem Shahzad, with his vast experience in breaking stories and exposing the untold, got hold of some lead which could have exposed a wider picture of PNS Mehran attack? Even the initial investigation surprised every one when it was found that the communication equipment (Wireless) used by the attackers was a custom made American model, in use of coalition troops in Afghanistan.

The way an onslaught was launched on ISI speaks of itself, as if everything was on hold. His concern of being under surveillance and watchful eye is something faced by every journalist, because they break stories and the intelligence sniff stories.

Secondly, the way he got threatening calls or messages in the name of ISI itself shows that some hidden hand was playing around him, creating a climax before disposing him off. I read somewhere that he was not revealing the source of his news story, and I am sure his â€œsourceâ€ after giving him the clue was himself exposed in case at some stage he revealed it or the concerned party found it.

In short, the agencies especially the one under discussion cannot be that dumb to go around well known, well wired person in this manner & in case an action of this sort is planned, no one would like the body to be found. If cases are in the courts of hundreds of missing person credited to the agencies, why not another one but disposing the body in this manner with overwhelming torture marks shows it all.

In the past there have been odd cases of agencies at odd with journalist, but not of this extent and I am certain that this unfortunate episode has been planned and executed by a 3rd party.

Some years back Musa Khan Khel, Geoâ€™s topline reporter in Swat was executed in the same manner. He was equally well wired just like Saleem but it was clear that TTP disposed him off after he grabbed vital Intel on some â€œgrey factsâ€.

Hillary Clintonâ€™s reaction after Saleem Shahzad’s murder was most surprising. Her personal message and reservation on this issue is somewhat suspicious. We welcome her concern but havenâ€™t much from her in other vital cases, why specifically on this case ???

The ongoing Headley (Mumbai Attack Case) in US, backstabbing of ISI in OBL case and the whole episode of this killing means something. If anything which irks American in their scheme in this region matters, itâ€™s the capacity and capability of ISI. Yes, they have been bowled in the past few month, but lets not forget it started the day Raymond was caught, and eyes were shown to CIA. Every story has an inside story, and in this unfortunate case there is a lot more than it seems. ISI has a gifted chance of uncovering the murder of Saleem, and this will clear the dark and thundering clouds threatening this invaluable asset of Pakistanâ€™s security arsenal. I have a firm belief that the link projected between Saleemâ€™s killing and ISI is a world apart, but at the same time it is very important to dig out the real killers of this brave journalist.

To end, my heart goes out with the family of Saleem and ofcourse global journalist community who have lost a pearl in the shape of his murder. May Allah bless his soul with Heaven.

11 thoughts on “Saleem Shahzad Murder: Another move to trap the Hunters?”