Forty years is a long time. Could be the entire lifetime of an individual. For me it is the double of my lifetime to date. Simple imagine all these years of my life spent in a cage is very depressing.

It is the nature of human beings to socialize. Human beings undergo development throughout their lives. We are very dependent upon each other for our individual as well as universal system to survive. Hence, if one were kept in solitary confinement for ages, his/her abilities would be affected drastically. There would be no opportunity to develop oneâ€™s faculties and what was already known, prior to the confinement, would gradually fade from memory.

â€œEvery aspect of their life, including their social interaction, is threatened. Their whole life changes: their memory, problem solving skills, speech, swallowing, not to mention all the physical things, like paralysis, that affect them.â€ (Lisa Shirk) This quotation fits very well with the situation of one who is isolated

It is harsh on the mind and body. 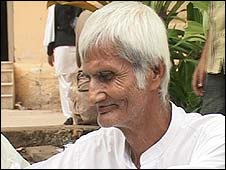 Saeed-ul-Haque, 85 years old, was released from Karachi Central Jail on Friday, after 38 years of imprisonment. His crime-never established.

An unknown man was found murdered. On January 20, 1971 the Artillery Ground police arrested Saeed-ul-Haque on suspicion. No one ever troubled himself or herself into investigating if it was, in fact, Saeed who murdered the man. The FIR simply stated â€˜A man found murderedâ€™. Albeit, there was no FIR against him yet he was being punished.

As has happened to many others, Saeedâ€™s case was never brought forward to a court. He was just left to rot in jail.

On a visit to Karachi Central Jail in 1999, Qadir Khan a member of Jail Reformers Committee, learned about Saeed-ul-Haqueâ€™s plight (he has lost his mental stability due to severe torture at the hands of â€˜Justiceâ€™). He sent an appeal to the government (Nawaz Sharifâ€™s regime) to release Saeed. He received no reply.

Qadir Khan opened a trust committee, Qadir Khan Mandokhail and began striving for justice to be done. The trust sent an application of release to the Sessions Court that found him innocent in 1999. However, considering his mental illness he wasnâ€™t released until, now, when he has recovered.

So, healthy sessions of torture were added to the agony of solitude. More details can be found by visiting BBC URDU.

One wonders how fear does not creep into the hearts of those brutes, who are the reason injustice has been inflicted upon millions of souls. In Islam, justice a moral virtue and an attribute of human personality. It is its basic objective.

Allah SWT told the Messenger (s.a.w.w.), â€œO My slaves, I have forbidden injustice for Myself and forbade it also for you. So avoid being unjust to one another.â€ [Saheeh Muslim]

â€œO you who believe, be upright for God, and (be) bearers of witness with justice!â€ [Quran, Al Maaâ€™eda :8]

â€œWe sent Our Messengers with clear signs and sent down with them the Book and the Measure in order to establish justice among the peopleâ€¦â€ [Quran, 57:25]

Everyone will be accountable for his/her deeds. No one can give the excuse that they were not aware of what Allah SWT has said. From the above verse we can safely state that since the beginning of time, Justice has been accentuated.

3 thoughts on “Saeed-ul-Haque: Are We the Bearers of Justice?”