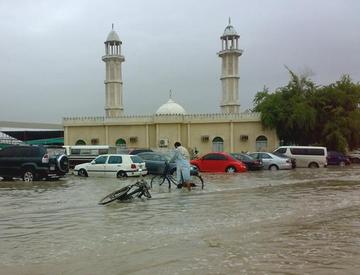 Dubai and Sharjah residents have been shocked by the way their lives have been affected by the recent heavy rains. Boats are plying in Jabel Ali, while almost all of Sharjah is in knee-deep water. And this has happened after only four inches of rains. Roofs of most houses and luxury hotels have leaked, while the supermarkets have run out of milk and bread. (This is not much different from what happened in Karachi after the assassination of BB last month). Most office workers are stranded at home, schools are closed, and business activity has been almost nil for the past two days. Hundreds of traffic accidents have been reported. This has happened only a day after George Bush visited Dubai, when all roads were closed and people were advised to stay at home for the whole day. It seems that things will not return to normal soon. 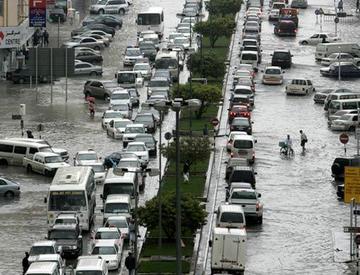 Apparently the authorities had never anticipated such a heavy downpour, as a result of which they did not provide an effective drainage system. It is now clear that residents of the U.A.E. will have to get used to their lives being disrupted during the rainy season, so they should always keep at least two days of foodstuffs in stock in their houses.