Today’s Jang and the News published that President of Pakistan Asif Ali Zardari holds American nationality as claimed by a well-known US website NNDB (Notable Names Database). The websites contains over 37,000 profiles of notable people around the globe. The website introduces itself as;

NNDB is an intelligence aggregator that tracks the activities of people we have determined to be noteworthy, both living and dead. Superficially, it seems much like a “Who’s Who” where a noted person’s curriculum vitae are available (the usual information such as date of birth, a biography, and other essential facts.)

The site also mentions charges of blackmailing, corruption on him and declares him a patient of diabetes and depression. He is the only one listed as blackmailer on the site while joined by many others on corruption list. 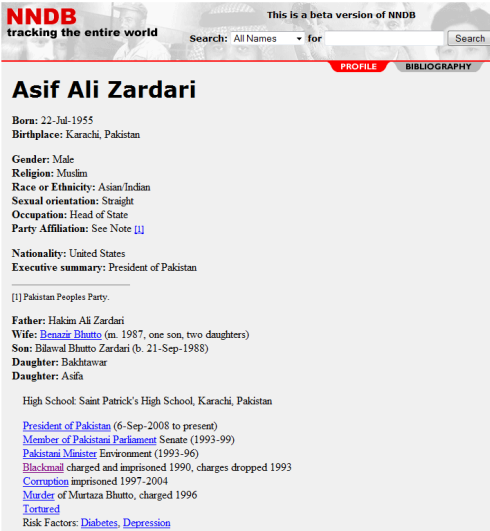 As per my knowledge constitution of Pakistan does not allow any ‘foreigner’ to contest elections or to be elected as PM or president of Pakistan. What can I call it a shock, conspiracy or truth? Until now there is no response from the Presidency on this issue.

The issue will give rise to speculations and conclusions along with some gossip material for Talk shows of this week but the question will remain who could authenticate the truth of this claim?

12 thoughts on “President of Pakistan Asif Zardari is a citizen of United States?”