The most frequently used line on air these days is ‘see you after the break’ or ‘milte hain break kay baad’. Even during a short duration talk show or sitcom people have to watch equal length of advertisements. The practice becomes irritating during the broadcast of live cricket matches when the viewer have to digest commercials after every over. Pakistan Electronic Media Regulatory Authority (Pemra) eventually realized that there are some rights of people who watch television and some times get annoyed with long duration commercial breaks. In an advertisement published in today’s newspaper it recommend people to complain about those satellite TV channels which are not following Pemra ordinance regarding the maximum time of advertisement to be shown during a television program broadcast.

According to the Pakistan Electronic Media Regulatory Authority (Pemra) Ordinance, 2002 rule 15(3), during a regular program a continuous break for advertising shall not exceed three minutes and duration between two such successive breaks shall not be less than fifteen minutes.

How many satellite channels can survive if people start registering complaints against them? 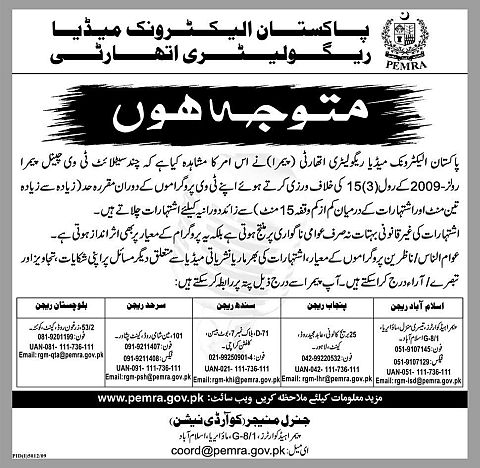 2 thoughts on “Pemra wants to hear it from you”