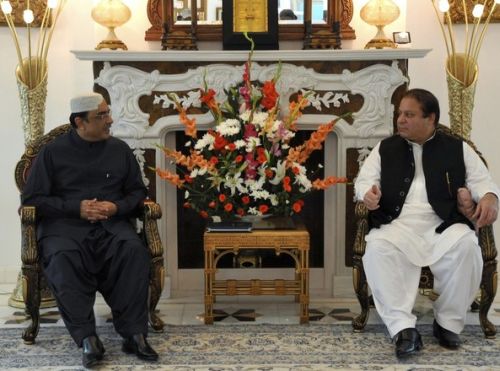 This week, we witnessed the top leadership together once again after the lapse of over 9 months. During this time, they were mostly at odds with each other and in other words, they were just waiting and watching. But the ground reality has hardly changed, and its clear that the split will emerge, sooner or later.

So what do we have to offer, on one hand we have the president holding the most powerful office, while on the other hand we have Mr Opposition, who is undoubtedly the most popular person right now. Now this has naturally put them at odds, and one’s success is simply the defeat of the other, or in short term it’s a zero sum game.

Presently, the latest summit gave a declaration which is no less than ideal, with both agreeing on nearly all the outstanding issues. But it’s the past that haunts us, and the same happening in the future remains as a nightmare. Mr President is undoubtedly in a pretty hard position. His popularity graph is still on a decline, and its hard to understand which dramatic step can move it in the opposite direction. On the other hand, Mr Nawaz after riding the tides of judiciary conquest, has found himself in a strange situation. The geo strategic dynamics and outside environment has compelled him play the role of the first time heard “Friendly Opposition”. By saying yes to the current state of governance, he is also aware that he is risking his party and his own fortunes. So in the case like this, we are somehow left with two options; firstly Mr President silently watches as one by one hurdles from Sharif get removed while Mr Sharif let the current setup run for the next 4 years.The 2nd situation is that both of them hold their cards close to their chests, and strike as soon as they get the chance. Though we all want the 1st condition to reveal, their track record tilts toward the second option.

There is no doubt that the current government came at a very crucial point, and was surrounded by storms from energy crisis to security. But it wont be irrelevant to say that things have somehow turned from bad to worse. As it is usually argued, “they rather plan for days instead of years”. The only thing which has stopped both sides from a full out confrontation is the security and IDP crisis. INSHALLAH with the way things are moving, it will not be long that both these issues will be settled for good. But what next?

There is a gulf of pending hardcore issues which will haunt this alliance. Where for PML-N 3rd term as premier and 17th Amendment will be the real battle field, the President will have to defend the still undecided NRO and Musharaff trial. Already some preparation is under way in this regard. The idea of separation inside Punjab (though not originally PPP’s idea) will be seen as a direct challenge to PML-N’s power structure. For a reconciliation at this magnitude, you need some extra ordinary leadership. But unfortunately this is the basic thing that both leaders lack. Mr Zardari on his personal will tried against the tide to stop CJ Iftikhar from reinstatement, only to end up giving all the credit to PML-N. While Mr Sharif did the same after gaining a 2/3rd majority back in 1997, taking on judiciary and military side by side.

Keeping this in mind, we are heading towards a serious crisis as we witnessed just a few months back, and this time around a lot more will be at stake. The worst has been delayed for the time being, due to the prevailing situation and outside pressure, but it’s a volcano that is gearing up for eruption, if both sides fail to act in a responsible manner.

1 thought on “Nawaz Zardari Summit: Its Delayed For A Better Day, Gentlemen!”