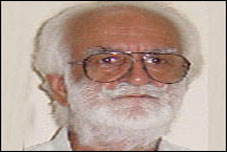 Nawab Akbar Bugti, the chieftain of the Bugti tribe, has been killed in fighting with government forces in his hideout, the government said early on Sunday.

An Interior Ministry official said 21 elite commandos and 37 militants were killed in fighting on the border of Dera Bugti and Kohlu districts. Six officers were among the 21 security force personnel killed, said the official who declined to be identified.

British-educated tribal leader Bugti, who was in his 80s, fled his stronghold in Dera Bugti earlier this year after a crackdown by the military.

The clampdown was sparked by a rocket attack during a visit by President Pervez Musharraf to Balochistan in December. Bugti gave an interview to AFP earlier this year from his hideout in the craggy mountains surrounding Dera Bugti in which he pledged to continue his resistance.

Security officials said forces on Friday launched air strikes against a cave complex in the mountains on the border of Dera Bugti and Kohlu districts where the chieftain was hiding. The missile raid destroyed the entrance to the rocky hideout and special forces moved in on Saturday to carry out a “cordon and search operation”, one security official told AFP. Heavy fighting broke out as the militants returned fire, killing several soldiers including the leader of the commando team, the official said.

The soldiers eventually secured the area and ascertained that Bugti was among the dead militants, he added, without giving further details. The operation was continuing, officials said.

Officials were privately downplaying speculation that Bugti’s death could provoke retaliation by the militants and that the instability could spread even further.

Bugti had become increasingly isolated during the months he spent in his cave, which was accessible only by a lengthy journey on camels across the wilds of desolate Balochistan.

Hundreds of his tribesmen had recently accepted a government amnesty offer and handed in their assault rifles and rocket launchers, while locals had reportedly tired of his battles with the military. Pakistan crushed a similar militancy by ethnic Baloch tribesmen in the 1970s. -Agencies

Sources told The News that Bugti was trapped in the operation launched to eliminate miscreants and the operation was carried out by the agencies after a series of attacks by the militia on the law-enforcement agencies. Bugti was in communication with the government till the last moment.

It is feared that more than 100 people have been killed in the fighting that lasted more than three days.

Journalist Ahmed Rashid is of opinion that Sardar Akbar Bugti is likely to become a martyred hero for Baloch nationalism and nationalists elsewhere in Pakistan – rather than the anti-government renegade and reactionary tribesman Islamabad would like to portray him as.