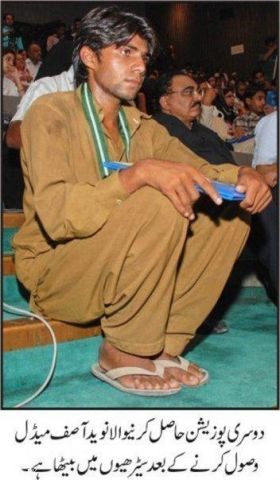 Social networks these days are full of pictures and write-ups to honor the achievement of a 17 year old Muhammad Naveed Asif, who has secured the second position in Humanities Group of matriculation examination of the Board of Intermediate and Secondary Education (BISE) Lahore by scoring 919 marks. He might have topped the Science Group provided science subjects were taught in his school which could not be offered there owing to shortage of science teachers. The youngsters are writing comments and forwarding the post regarding Naveed with a lot of extol for him and criticizing the organizers of the ceremony as he couldn’t find a seat for himself in spacious Alhamra Hall, Lahore to sit in a function which was arranged to honor the position holders. CM Punjab Shahbaz Sharif later on offered his seat to this young achiever and awarded him Rs3 million.

Naveed Asif is an orphan and his mother works as a laborer to bear his educational expenses. This young boy from Nahranwali village, Okara is certainly a source of pride for the whole nation and inspiration for the youth. His school was 7 KM away from his house and he used to walk everyday to go to his school. He achieved what he aspired for instead of criticizing the system or the circumstances.

Being a teacher myself I have never heard a statement like this from any student when they were asked who your role model is or who you want to be. But Naveed said,

“You may deem it ridiculous but I ever said to my mother that I wanted to be like Quaid-e-Azam Muhammad Ali Jinnah, as I ever considered him my role model,”

Why the rest of the youth does not want to become like Quaid-e-Azam?

Future of Pakistan is now in the hands of people like him. Salute to him and all his efforts. May God give him strength to shine like this always despite of all odds and he will be able to bring more laurels.