According to Indian web site Tehelka.com, Indian government had received the vital and significant intelligence five days before Mumbai attacks which had been simply ignored. The mobile numbers that were used by the Mumbai terrorists were available with the Intelligence Bureau at least five days before 26/11.

Highly placed sources shared the contents of a ‘Secret’ note that contains 35 mobile numbers. Out Of the 35 SIM cards, 32 had been purchased from Kolkata and three from Delhi and sent to Pakistan-administered Kashmir by mid- November. That crucial and stunning piece of information was received by the Intelligence Bureau (IB) on 21 November, at least five full days before Ajmal Amir Kasab, the lone surviving terrorist and his nine accomplices reached Mumbai.

The Prime Minister and Home Minister are aware that for all the five crucial days that the numbers were available, they were not being monitored. The lapse is all the more critical because at least three of the 32 numbers contained in the Secret note, were the exact same cell numbers that the Mumbai terrorists used to keep in touch with their handlers.

It is well possible that the terrorists only activated their mobile numbers after reaching Mumbai but that does not excuse the fact that the numbers were not put under surveillance despite the knowledge that they had been sent to terrorists.

On 18 September, the Research and Analysis Wing (RAW) had intercepted a satellite phone conversation, which clearly indicated that a hotel at the Gateway of India in Mumbai would be targeted. Crucially, the intercept also revealed that the sea route would be used to launch this operation. Again, on 24 September, RAW recorded another conversation. This time, the hotels were mentioned by name and they included the Taj, the Sea Rock Hotel and the Marriott hotel 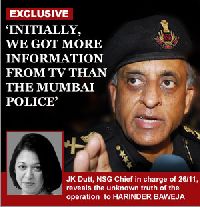 Security breached ease with which Mumbai came under attack brought back the question of internal security. Today in an exclusive interview with the Jyoti Krishan Dutt, the Director General of the National Security Guards (NSG), the same website reports another exclusive story. for the question about the number of terrorists and briefing from Mumbai Police he replied that he was relying totally on media reports and visuals on TV.

In fact, at that time, what was being said over the TV was that these terrorists have come via the sea route. The second pointer was that such terrorist activity is not possible without local support. The third was the fear that the terrorists might have checked into the hotels as guests and might have stocked up on ammunition and explosives. So there were a lot of theories floating around and no real way to verify them. Even the state authorities didn’t have much data. As for the number of terrorists, they told us that they had spread out to different locations, but that there could be one or five or 10 or 15 or even 20 terrorists at the Taj.

When the incident is going on the NGS officer was relying on TV reports, assuming everything was known to the reporters but not the officers who were taking action. Isn’t it strange. Again he said that;

The whole incident is twisted and now these exclusive stories are coming frequently. If they had intelligence of such incident way before why there was no action? Probably they let it happen intentionally to provoke war against Pakistan.

3 thoughts on “Mumbai Attacks; An Intelligence Failure or Ignorance”