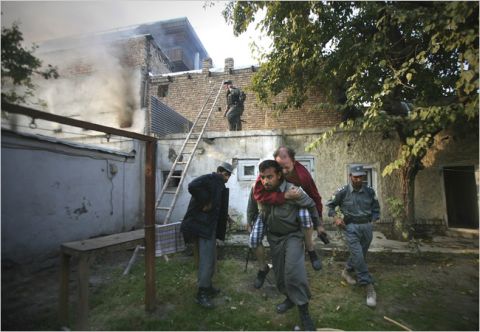 At least three gunmen wearing suicide vests stormed an international guesthouse in the in the Shar-i-Naw area of Kabul, Afghanistan before dawn killing at least ten U.N workers and wounded many others. They fought pitched battles with security forces for two hours before they either detonated their explosives or were shot dead. According to Taliban it was the “first step” to disrupt next month’s presidential runoff election between President Hamid Karzai and Abdullah Abdullah.

Through a spokesman, Zabihullah Mujahid, the Taliban took responsibility for the attack on the guest house, known as Bakhtar, which is often used by foreigners working for various United Nations agencies.

As that stand-off came to an end, a five star hotel, The Serena, was hit by mortar fire. Witnesses reported seeing smoke coming from the top of the building but the attack did not cause any casualties. The hotel, located close to the presidential palace and used regularly by visiting diplomats and journalists, was the scene of a 2008 Taliban attack which killed six people.

“This was a very serious incident against us this morning,” said a U.N. spokesman, Adrian Edwards, adding that the death toll from the attack could rise.

A loss like this is extremely difficult for the families as well as for those who served alongside these brave service members. What will Taliban achieve by killing those who are there to help people in distress? Why only targeting UN and its staff members?

The escalating death toll in Afghanistan in past few months adds to pressure on Barack Obama, the US president, as he nears a decision on a revised military strategy for the eight-year-long war in Afghanistan. U.S soldiers now make up two-thirds of the 100,000-strong coalition force, with Obama considering proposals to send an extra 40,000 troops or a far smaller number.

According to BBC the UN is working on the immediate measures it can take but that the attack is certain to spark a rethink about both security and the UN aid agency presence in Afghanistan.

3 thoughts on “Militant Attack on UN Staff in Kabul”