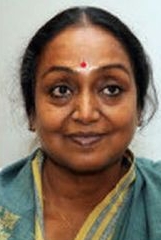 India’s parliament elected on Wednesday its first woman speaker, who is also a member of the low-caste Dalit community, an event hailed by Prime Minister Manmohan Singh as a “historic occasion”. Meira Kumar, 64, was elected unopposed by a voice vote in Lok Sabha, India’s 543-seat lower house of parliament, which includes 59 women MPs. “For the first time a woman member has been elected speaker and that too a woman from the Dalit community,” Singh said after Kumar had taken her seat of office.

Her name was put forward by the Congress party following its resounding general election victory, which guaranteed that the party’s nominee for speaker would be elected. In the event, Kumar was the only candidate and the opposition opted to go along with the choice. The motion to elect Kumar was moved by Congress party chief Sonia Gandhi and seconded by opposition leader L.K. Advani from the Hindu nationalist Bharatiya Janata Party. The media was supportive, with the Hindu newspaper noting that Kumar brought years of experience as both an MP and a minister to the speaker’s office.

Political analyst Neerja Choudhury said Kumar’s nomination was a “conscious decision” on the part of Congress to strengthen its support base among India’s 160 million Dalits, also known as “untouchables”. In recent years, many Dalit voters have switched their support to regional parties with a specific “Dalit agenda” of alleviating the problems faced by India’s lowest castes. Shunned by higher castes, Dalits generally perform the lowliest occupations, including scavenging on rubbish dumps, and are the poorest in terms of income, literacy and land.

It is worth while to recall that in 2008, Pakistan elected its 1st women speaker, Ms Fehmida Mirza.