The International Republican Institute (IRI) released its survey of Pakistan public opinion. The poll was conducted between March 7-30, 2009.

The randomly selected sample consists of 3,500 adult men and women from 216 rural and 134 urban locations in 51 districts in all four provinces of Pakistan. The margin of error for the national sample will not exceed + 1.66 percent in 19 out of 20 cases.

IRI has conducted surveys in Pakistan since 2002. The goal of the program is to both gauge public opinion and to use this information in IRI’s work with Pakistan’s political parties. 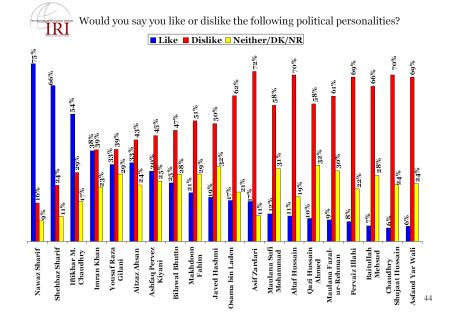 Nawaz Sharif is the most popular personality tested in the March 2 009 poll. The number of people viewing him favorably increased 15 points to 75 percent, placing him well ahead of the rest of the field. When asked who they would prefer as president, 71 percent supported Nawaz Sharif while 16 percent selected President Zardari.

Army Chief of Staff General Ashfaq Pervez Kiyani also saw an improvement in his image,with 30 percent rating him favorably, up four points since the last poll. 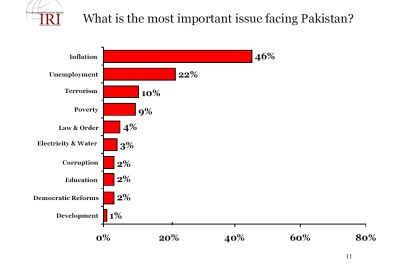 The top issues according to this survey are Economy and terrorism. When asked what the most important issue facing the country was, 46 percent cited inflation, 22 percent chose unemployment, and nine percent selected poverty. This represents a total of 77 percent of the population citing an economic issue as their top priority, which is consistent with previous polls.

It seems that Pakistani people are more concerned for inflation than any other issue like poverty, corruption, education etc.