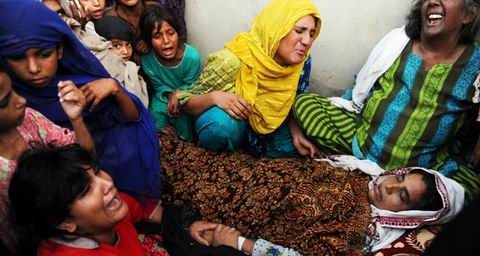 The death incidents during subsidized flour sale throughout the country should be taken as a warning by the government but it seems that government has done enough from its side by providing subsidized food items and the rest is for the public to bear. The country did not lack flour and sugar, however, what it really did lack was justice and good governance. The incident at Khori Garden Karachi is an example of it.

According to media reports a stampede killed up to 20 impoverished women and children, crushed in a stairwell and alley, when charity workers handed out free flour in Karachi’s Khori Garden, a warren of narrow lanes and side streets ill equipped for large crowds. A private security guard responsible for making sure the women formed an orderly queue baton charged the women when they became impatient with the long wait. It was suffocation and fatigue which is blamed for the rush. Women are waiting for the free ration while fasting which it self is a humiliation.

Jodia Bazaar, the city’s biggest wholesale market, saw heart-rending scenes of poor families retrieving bodies instead of sacks. The rice dealer, Chaudhry Mohammed Iftikhar, a resident of the Defence Housing Authority has organized the free ration stall. Tokens for free ration were being given away by the distributor at the rooftop of the rice dealer’s three-storey outlet while a 10-kg sack of rice was being handed to women from a nearby ground floor warehouse. The narrow staircase victimizes the women during stampede. The rice dealer had been arrested and booked for negligence and unintentional killing of the women.

It is an indictment of the state itself – of its inability to provide for the most basic needs of its people; of its apathy when it comes to protecting the life and dignity of its most vulnerable citizens. The system will now swing into action, making a show of punishing the individual whose altruism led to yesterday’s disaster. But who will indict and punish the state? The women and children who jostled and pushed their way towards handouts were not driven by greed; they were driven by hunger and the fear of starvation. And they, and countless others like them across the country, have been pushed to the point of wretchedness by a state that has failed twice over in fulfilling its responsibilities.

The slogan of ruling political and democratically elected party is ‘Roti, Kapra aur Makan’ but now days people find hard to buy flour how they can think of clothes and house. The state is responsible to provide facilities for the public including health and food. Is there any government? Presidency is offering royal iftar dinners and gossiping around about Musharraf while people are battling to survive. Those who can not even guarantee the commodities provision have the right to rule? It’s a shame. An apology should be given by the authorities rather blaming who was responsible for it and who was not if they have guts.

I pray to Almighty Allah to rest the departed souls in eternal peace and grant courage and fortitude to the bereaved families to bear these irreparable losses. It is also necessary for the philanthropists to ensure proper security measures before distributing any charity ration so that such incidents do not occur in the future.