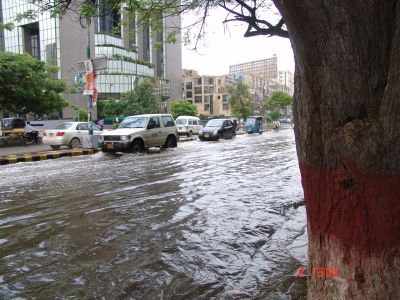 Recent rains have left large part of Karachi under water. While citizens are suffering from power breakdowns, water shortage, flooded roads and traffic jams, the CDGK and other authorities responsible for administration and management of city, are busy in the blame game.

After a day of rain, KPT Underpass in clifton went under water. KPT is holding CDGK responsible for this while CDGK blames KPT for not including it in the ‘consultation process’.

According to a news report, Sharea Faisal witnessed major traffic jams on Wednesday while the same was the case with M A Jinnah Road.

Majority of people who traveled on these roads complained about the inefficiency of the concerned departments who they blamed for not draining the standing water.

Minor mishaps were also reported as most of the inundated roads resulted in unnecessary accidents particularly for motorcyclists.

Heritage buildings like the front portion of Empress Market seems to have suffered the most in the current spell of rains. Empress Market, one of the oldest buildings situated in Sadder Town was totally surrounded by the rainwater.

Old city areas badly affected as there is a major problem for drainage in these areas. Urdu bazaar, City Court Road, Light House and its adjacent roads were in poor shape although efforts were being made to clear them.

Interestingly, all roads around the Sindh Secretariat, Sindh Assembly and Sindh High Court were filled with the rainwater and the level was higher than seen in other major roads.

Another sore point were flyovers where water had gathered at the start and end point. This was true of major flyovers like the FTC flyover where water had collected on the Gora Qabristan side and this was a cause for major traffic jams.

The Nursery area, adjacent to Sharea Faisal, was also badly affected. The main roads of Nursery market were inundated and most of the owners of showrooms and shopkeepers claimed that so far no help had come to clear the mess.

The road entering Gulshan-e-Maymar was in terrible condition. A passenger bus of Route 4-L tilted on the first day of rain by sliding towards one side. This bus blocked traffic and caused inconvenience to many.

The roads in Karimabad, Liaquatabad and Aisha Manzil areas were relatively in a better shape although sewerage lines also caused much tribulation. This caused traffic jams at certain stops since pedestrians faced difficulty crossing the water-drenched roads on foot.

Nazimabad Underpass was like a big swimming pool and kids were frolicking in the water. The pool also contains drain water as the sewerage line beneath the underpass was damaged. The Nagan Chowrangi main roundabout and the other major traffic junctions of North Karachi and Surjani town were also badly affected by the showers.

Different blocks of Clifton and some phases of Defence (2, 3, 4 and 6) were also having the same problems of flooding and overflowing roads. By and large, however, roads in Defense Housing Authority were in a better shape.

I I Chundrigar Road which is the commercial hub of the metropolis was at its worst state ever as the rain caused serious damage to the recently carpeted patches which converted into deep trenches and consequently some vehicles fell victim to these ditches along the road and some motor cyclists did suffer too and soon after that the traffic police had to close part of the road for the public safety.

City Nazim, while talking to The News, declared that rain water situation in under control in his jurisdiction and only those areas are flooded which are in Cantt or DHA limits.

2 thoughts on “Karachi Under Water – Who is Responsible?”