Karachi, and her people, beared through a prolonged moonsoon this year. It is raining, on and off, since July 30th. Rain itself is blessing from Allah but it was transformed into suffering and misery for people due to inefficient planning and mis-management by the local authorities. While the earlier phase of the rain damaged the city (pictures here and here), it was the downpour on thursday August 17, which really created havoc around the metropolis.

Although Thursday’s rainfall of 56 millimetres was heaviest of this season, it was much below the city’s record 24-hour rainfall of 278.1 millimetres on Aug 7, 1953. However, city’s roads, particularly those in downtown, turned into enormous puddles of rainwater which caused nasty traffic jams that continued hours after the rain had stopped.

– At least 13 people died from electrocution.
– Educational Holiday. Education authorities announced that schools and colleges in Karachi would remain closed for a day. 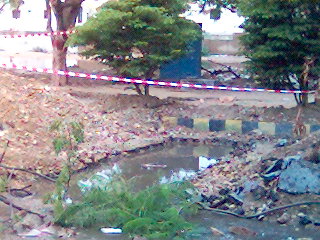 – The Civil Aviation Authority delayed several flights due to the inclement weather.
– Rainwater also made its way into houses in different localities, including many areas of the Defence Housing Authority, Bath Island and some other posh localities of Clifton. There were similar reports from PECHS Block 2, E Market area, Bahadurabad, Alamgir Road, Maqbool Cooperative Housing Society, Karachi Memon Cooperative Housing Society, etc, as the storm-water drains passing through those localities started overflowing.
– Under-construction underpasses were submerged under 15-feet deep water and at some sections of Sharea Faisal, three to four feet deep water had accumulated.
– Transport network collapsed. Dr Ziauddin Ahmed Road, Club Road, Maulvi Tameezuddin Khan Road, Metropole roundabout, Sharea Faisal, Abdullah Haroon Road, Fatima Jinnah Road, Zaibunnisa Street, Deen Mohammad Wafai Road, Aiwan-i-Saddar Road, etc. were jammed. Sharea Faisal, was completely choked right from Metropole up to the airport turning as the thoroughfare got submerged at various sections and its tracks were blocked at many points by broken down vehicles. Due to the accumulation of knee-deep water on the main artery, vehicular movement would come to a grinding halt intermittently.
– Traffic police personnel deputed at most of the places had disappeared amid the jam which led to the virtual collapse of the transport network. At some points, policemen were seen trying to regulate the traffic but they appeared helpless as the torrential rains had flooded roads.
– Flooding at Numaish and Guru Mandir intersections occurred as there was no arrangement to drain out the rainwater. Due to the flooded roads, many vehicles broke down causing traffic jam for hours. The jam also affected traffic flow in the adjoining localities, including Soldier Bazaar, Business Recorder Road, Shahrah-i-Quaideen, Jehangir Road and Jamshed Road where long queues of vehicles were seen struggling to get out of the clogging.
– Bandits go on looting spree. Cell phones and other valuables were snatched from people stuck in rain and traffic jams.
– Disrupted Power Supply. KESC, as usual, got into distribution problems and as a result various localities remained without electricity supply for hours on end. Areas affected by power outage included North Nazimabad, Federal ‘B’ Area, Gulshan-e-Iqbal, Soldier Bazaar, Kharadar, Saddar, Korangi, Defence and Clifton.
– Telephone services affected. Mobile phone users complained of disruptions in services after the rainfall. Landline phones also went dead in various localities.

Some accounts of people stuck in rain can be found here, here and here,

While things were all bleak and dark during the rainfall, with most of the administration out of sight, there were incidents of people helping others out. Those courageous souls, including men in uniform, got drenched in heavy downpour but help their fellow citizens around, as reported here.

2 thoughts on “Karachi: After the Rains”