ITCN Asia is annual Information and Communication Technology event in Karachi. The 2013 edition of ITCN Asia was organized on October 8-10 at Karachi Expo Center.

My observations of ITCN Asia 2013 are based on my visit to the venue on the second day of the event.

There was a long queue of cars outside Karachi Expo Center when I reached the place at around 4pm. My initial thoughts were that the event was jam packed with visitors and I may not find parking inside. However, a closer look left me in bad taste. I have found that all the cars outside Expo Center had their drivers waiting for the passengers who went in for sight seeing. No one from the event organizers or the traffic police was there to sort out these dozens of cars obstructing traffic and making it hard for the visitors to get inside – Karachi, as usual.

The exhibition at ITCN Asia 2013 was duller than expected. Only 2 halls of Karachi Expo Center was used to host the exhibitors. Although the organizers claim there were more than 200 exhibitors at the event, I seriously doubt the figure. Also, many exhibitors preferred to attend virtually, leaving their stands empty with only a name plate showing the space is reserved for them.

ITCN Asia organizers also claim that the return rate for exhibitors is 80%. I doubt that as well. Comparing with ITCN Asia 2012, majority of exhibitors have not returned this year. 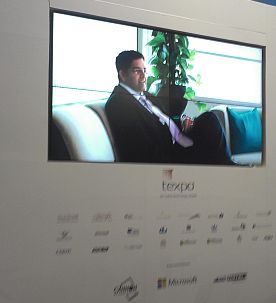 According to their website, Texpo is an infrastructure provider, application development and business & IT consulting company. Texpo has head office in Dubai, UAE with presence in USA and Saudi Arabia.

While it is nice to see an infrastructure provider coming to Pakistan / Karachi. I am unable to think up a business case for them, considering the insecurity and electricity issues here.

A number of digital marketing companies were present at ITCN Asia 2013. This shows a trend that more and more businesses are realizing the power of Internet Marketing.

The takeaway of ITCN Asia 2013 was iFahja, a software house from Peshawar, Khyber Pakthunkhwa. iFahja participated in ITCN Asia 2013 with My Smart Remote, an app to control car lock/unlock features. It is great to see creative minds exhibiting their products from troubled parts of Pakistan.

Exhibitors who came without homework:

ITCN Asia 2013 had its share of exhibitors that came to the show without doing their homework. One such participant was Odits.co. A company from Nazimabad, Karachi, offering email marketing among other services. However, their representative of unaware of terms like double opt-in, white-lists and permission based marketing. When I asked him if people complain on receiving unsolicited emails, he said: “Agar aap kay ghar koi Pizza Hut ka pamphlet daal day tau kya aap Pizza Huat jaa kar complain karain gay?”. I hope not all digital marketing companies think and work like this.

Another exhibitor that participated in ITCN Asia 2013 without doing homework was Shopnguide.pk. They were at the event to promote their website as well as Location Based Search and Location Based Advertising. However, their website is half baked with number of pages showing prompts like “Update Shortly”.

Past exhibitors missing in ITCN Asia 2013:

Previous events of ITCN Asia had some interesting exhibitors which were not found this year. This also refutes the claim of 80% repeat visitors by event organizers. Some of the past exhibitors that were not present at ITCN Asia 2013 are Telecom providers (Wi-tribe, PTCL etc), brands like LG, United Mobile, Huawei, Tenda etc.

In spite of all its shortcomings, ITCN Asia is a commendable step to keep IT industry in media limelight. The event also provides some networking and marketing opportunities to companies seeking potential buyers or target markets.