Howard Schultz, CEO of Starbucks has been involved in helping Israel and American Army deployed in Afghanistan. In 1998 he was honored by the Jerusalem Fund of Aish HaTorahwith “The Israel 50th Anniversary Friend of Zion Tribute Award” for his services to the Zionist state in “playing a key role in promoting close alliance between the United States and Israel”. The Jerusalem Fund of Aish HaTorah sponsors Israeli military arms fairs chaired by the butcher of Jenine -General Shaul Mofaz, Israel’s Minister of Defense. It aims to “strengthen the special connection between the American, European and Israeli defense industries” and “to showcase the newest Israeli innovations in defense”. On the website page of Awards it was mentioned that in 1998 CEO had received an award from Israel but it is hidden afterward. Now it can be seen listed in archives.

Starbucks Corporation is an international coffee and coffeehouse chain based in Seattle, Washington, USA. Starbucks is the largest coffeehouse company in the world with 16,120 stores in 49 countries, including around 11,000 in the United States, followed by nearly 1,000 in Canada and more than 800 in Japan. Starbucks sells hot and cold drinks, snacks, and items such as mugs and coffee beans. Through the Starbucks Entertainment division and Hear Music brand, the company also markets books, music, and film.
Source:Wikipedia.

Few years back whilst the Israeli army was slaughtering Palestinians in Jenin, Nabulus and Bethlehem he made a provocative speech blaming the Palestinians of terrorism, he asked people to unite behind Israel. Company also invested in Israel in a joint venture but after heavy loss closed the project but still helping in fund raisers for Israel. Starbucks fully supports Bush’s war of terror and has opened a Starbucks in Afghanistan for the US invaders. 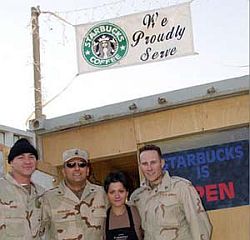 I am surprised while researching for this topic when I didn’t find any kind of protest or condemn from Muslim countries or expat against the CEO and company. I found a forum having billions of members with discussion about opening a star bucks in Pakistan and many Pakistanis responding to it with mixed views about the coffee not the company. Among 4,709 locations around the world in many countries following are Muslim countries having Starbucks.

Star bucks provide a glossy pamphlet “We’d love to hear your thoughts” for people to write their comments on.
If you are near a Starbucks outlet and it includes free postage, I would urge to use it for voicing disgust at Starbucks CEO and at Starbucks policy to invest in apartheid Israel. Remember to provide your name and address and ask them to reply to you in writing otherwise your effort will simply be ignored.

We should condemn such companies and boycott their products on our part to let them know how we feel about their actions. There is no harm in protest like this. All expats should also boycott the company and its products to at least minimize the revenue.