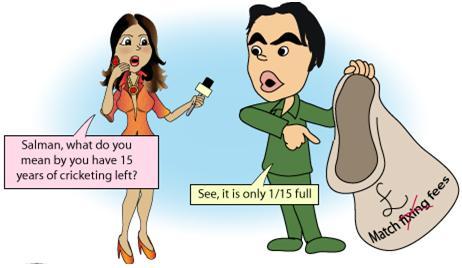 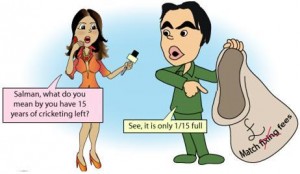 The lure of money (whether legal or illegal) seems to be too hard to resist for disgraced former Pakistan cricket captain, Salman Butt. It had not even been 100 hours since he, along with a couple of his team-mates, had been convicted of spot-fixing while representing his country in International cricket matches. But apparently that was time enough for Butt to reflect upon his past actions and move on to the next source of moolah, this time a contract as an expert TV commentator with a Pakistani TV channel.

Butt’s explanation for his latest venture included statements like: “As I am not playing in the event I thought it was worth participating as an expert” and “allow me to test a new area”.

If Butt is so interested in indulging in activities ‘worth it’ and ‘testing new areas’, how about signing up with someone to learn some morality since less than 4 days ago, you and your two team-mates defiantly stood in the face of hard evidence claiming false innocence. Or try to learn ways to gather courage and develop humility to say “Yes, I made a mistake and I am sorry.”

No doubt, there is nothing legally wrong in him signing up as a TV commentator. It is very much within the book of law, but outside the conscience of spirits.

If morality, courage and remorse are traits not in your dictionary and you are governed by shamelessness and greed, it’s only common sense to leave the lime-light after being disgraced in such a manner. But as it now appears, people he once marshaled, will toil away on the field, while he sits in an air-conditioned room counting his money, which he will probably make more than the some of the players.

Another feather in the hat of the trend of precedents being set by Pakistani players.