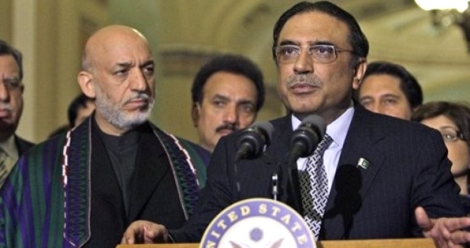 I have tried my best to dig the exact phrase in regards to this tour, but unfortunately I believe that there isn’t any valid phrase for it. President Zardari’s tour of the US carried a lot of weight, as all of us debated before his departure. The peace deal, the strengthening of Taliban, the outside interference, drones attack ……Alas! The list is hard to mention even here.

Any ways, the tour is over and it seems that it has gone all well for the President himself, because now Obama feels that he can manage the things on behalf of the Americans. I say this due to the fact that Obama himself came all out to criticize the democratic setup of Pakistan, along with his aids. On the other hand the US media had labeled both Zardari and Karzai as the most unpopular leadership in their respective states. With this onslaught, I must say the President has convinced them, as far as he is concerned. But where was Pakistan?

In his interview with Wolf Blitzer, he called himself as democratic nearly 20 times. I mean that’s enough to convince them. It was a trilateral sitting for Pakistan, Afghanistan and USA, but hardly it seems that was the case. Before embarking on the trip, Mr. Rehman Malik produced a charge sheet on Karzai for aiding Brahamdagh personally, the involvement of Afghanistan, Russia and India in the internal disturbances we have witnessed lately. It makes me feel that the delegation forgot those documents back here, as there was not a single point raised in this regards. I mean what was he doing there?

In past, at least the leadership had the tool to protest US against the drones attack, unfortunately this time around they even ditched that useless method. What happened to the case of Aafia Siddiqui, why wasn’t there any voice in this regard.

In the end, instead of this they did strike a deal on Pak-Afghan transit, and its already in the air that India has been given a clear walk in the garden to Afghanistan and Central Asia, under US pressure. On one side we are fighting the case against the activities of Indian consulates in Afghanistan and on the other hand, we are facilitating them. I must say that’s an achievement.

Quickly following this, US official have expressed the idea that India holds the key to Afghanistan, and talks are under way for the deployment of Indian troops in Afghanistan.

I must congratulate the delegation for achieving this feat for India, as I don’t have any thing to put in the basket of Pakistan from your generous trip.