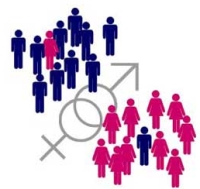 Gender and cultural bias is a very common phenomenon all over the world. But the biases and differences are twice in developing countries as in comparison with the developed nations. Let us not go so far and take the example of our own country Pakistan.

In Pakistan women are always stressed, frazzled and drained by the opposite sex. In a nut shell we live in a patriarchal society! From a teenager girl to mature women; every female in Pakistan faces the problem of being harassed by her male counterpart. Wherever she goes from a school to the market she is not secure in terms of being teased by males.

Hence gender differences lead to vulnerability of women as an individual. Females from age 6 – 60 are harassed by males; sometimes by touching, whistling, clapping or through their body language. Girls never talk about this thing with their friends and colleagues; as if they do so they are termed as outspoken, blunt, audacious and bold. In fact; a cultural and a gender biased society is renowned for tagging women!

Marriage is considered as foremost important thing in lives of Pakistani women; once they reach appropriate age they are wed off and those with plans of changing societal mind set change their own mind set and become a “Sughar Biwi“. But some women though a very little percentage work for creating awareness among masses on gender and cultural bias.

Women need to re-evaluate the circumstances for a positive societal change. If not everyone; a good number of women are being provided with the basic education in Pakistan. Some even excel in their professional studies as well. But the point to ponder is this that very few of these women work seriously for changing the mind set of male chauvinist society. This is because only few women are allowed to pursue their careers as a professional woman. In this context if something is to be blamed that is for sure male bigotry.

Now as an educated woman of twenty first century I have realized this thing that if we want to vanish line of cultural and gender bias between the two sexes; every one of us has to play his role fully. Secondly there is a dire need of providing women with the fundamental privileges that Islam has given her.

6 thoughts on “Harassment and Gender Bias in Pakistan”