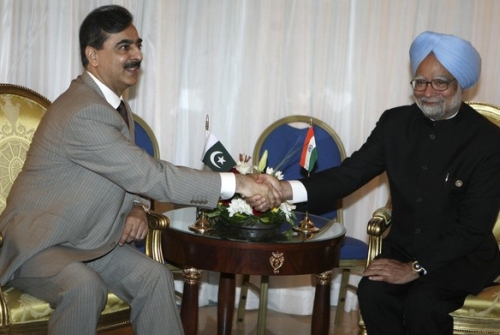 It has been argued time and time again, and I have the same opinion that peace is the best way around, and the most practical path to achieve it is through dialogue. The same can be said with regards to the 15th NAM Summit in Egypt, which also features a meeting between PM Gillani and Manmohan Singh. Though analyst have termed it vital for the near future, I personally believe that the unbending stance of Indians and Pakistanis will stop it short.

From 26/11, the two neighbors have viewed each other with far greater suspicion than in the past. Where Indians were keen to signal out Pakistan’s ISI for the whole saga, there was a greater feeling in Pakistan that it was an inside job. Where Indians created an air as if surgical strikes are soon to follow, down here the resolute will to defend was equally available. Having said this, the worst part is that the temperature is still rising, on both the sides. Out of all these odds, you need a great and bold initiative in order to move things a bit further. Like argued before, the differences among the two nuclear armed neighbor are growing day by day. For Pakistan, the activities of Indian consulates in Afghanistan and its impact on our internal security is quite visible, and for Indians it has become next to impossible to change there initial stance regarding 26/11, and the phobia of terror safe heaven inside Pakistan is haunting them.

In any case, this situation is not going to serve both the states, and as long as they don’t accept the reality of peaceful co-existence, peace remains a far cry. Like always, I will again end on the same note that if we cannot love each other (which is natural in this case), at least we can tolerate.

6 thoughts on “Gilani meets Manmohan Singh: What to expect from Indo-Pak Dialogue?”