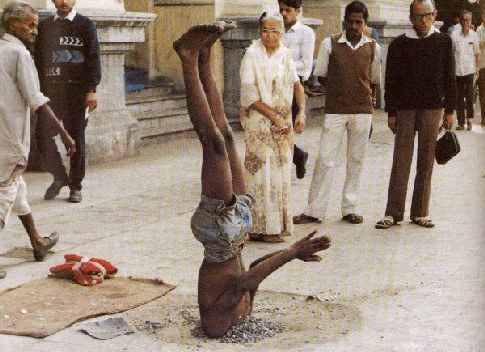 World leaders and scientists have been stunned to hear that India has suddenly landed a man on the moon. According to reliable sources, India began preparing for the moon landing as far back as 1947, the year it became independent, when most Indians had never even seen an aeroplane.

A super fit man was selected from thousands, and kept on a diet of special herbs and cow piss to keep him healthy for a long time. The man was thrown into the sea from aircraft flying at ten thousand meters, he was made to stand in the hot sun for a hundred days and nights to develop stamina, and finally dumped naked on the top of Mount Everest to walk back to his house in the freezing cold. But strangely enough, the Indian government appears to be reluctant to provide details of the moon landing. However, our representative was able to get a photo of the man after he landed on the moon. I think the Indian government deserves to be congratulated for this astounding feat.

6 thoughts on “First Indian on the moon”