Machar Colony is one of the neighborhoods of Kemari Town in Karachi. Its total population is estimated to be over 700,000 people, majority of them being children between ages 5–15. This is an important figure, and has to be seen in conjunction with the fact that Machar Colony is also amongst the biggest (maybe the biggest) of Karachi’s over 550 katchi abadis. Machar Colony spans an area of four Sq. km.

Most people in the Colony are employed as shrimp peelers, fishermen, fish cleaners, or laborers in the ship breaking industry. They all belong to lower middle class having insufficient health and education facilities. Many illegal immigrants live here belonging to various ethnic groups. Poor sanitation, unhygienic water supply and absence of natural gas in the area are common problems.

An NGO Concern for children is involved in various community driven development project for the people of this area.The project aims to enter the community, empower pre-existing health and education facilities simultaneous to providing residents with awareness and guidance on how to enhance the quality of their lives. 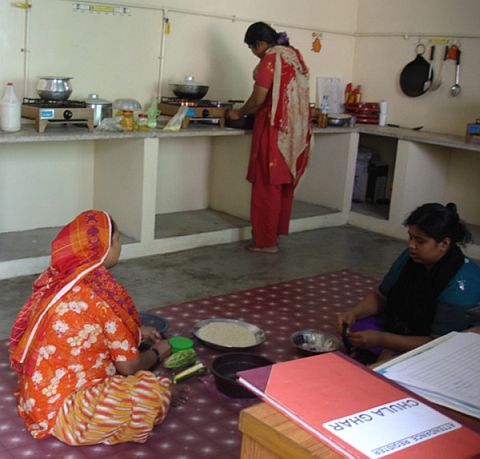 One of the interesting and well organized environmental and health initiatives is the launch of the first community kitchen in Karachi at Machar Colony called “Cholha Ghar”. This project developed out of an awareness that low income families were spending up to 20% of their monthly income on firewood. Along with the environmental degradation caused by the deforestation of surrounding Mangroves, families cooking on firewood, often in enclosed spaces, suffer from a high rate of respiratory illnesses. 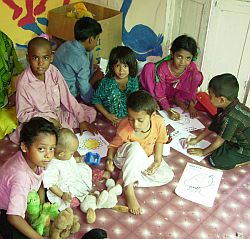 The project houses several stoves which are equipped with LPG (gas) cylinders. Women can cook food in three shifts with a one hour information session twice a week in community kitchen. Information sessions will cover nutrition, food hygiene and also serve as a platform for CFC to launch its mental health awareness talks. Initially the pilot project is serving around few dozens of families while it is aimed to increase the number of stoves to serve more families. While women keep busy in cooking healthy meal, their children are allowed to have some educational help in adjacent room.

The project aims for the health of family and children which are the future of nation. They surely deserve the best of this world and we can help them by our donations.