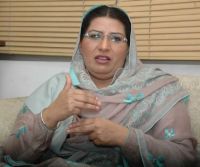 Federal Minister for Population Welfare Dr Firdaus Ashiq Awan of the PPP was in hot waters for using ‘non-parliamentary language’ against a woman parliamentarian on a TV talk show recently but it seems that endless controversies are surrounding her. The latest case of tampered Nadra records of Federal Minister took a new twist with allegations emerging of two teenagers being trafficked to Italy, impersonating as minister’s sons. The minister has also been accused of receiving Rs. 500,000 as bribe, according to a confessional statement of her private secretary and an alleged trafficker.

Nadra’s offices in the parliament house and another in Rawalpindi’s Commercial Market have been used for registering the entries of three boys, two of them teenagers, and a girl. Ibrar Ashiq and Usman Ashiq have been registered as teenagers at Nadra’s office in the parliament house, record indicates. Nadra office manager at that time told the FIA in his recorded statement that Dr Firdaus Ashiq herself came to register these entries, an assertion denied by the minister. The said manager was released on post-arrest bail by the Islamabad High Court but he is still under suspension.

Faisal Aziz and Shazia Bibi, two other fake children of Dr Firdaus Ashiq, applied for ID cards (as they were over 18) at the Commercial Market office in Rawalpindi. One Mansoor Ahmad had their documents secured from the foreign office assistant director, Yasir Ahmad, (currently on posting abroad) as the minister’s son, and these were later dispatched with the applications for Italian visa. Ibrar and Usman were consequently trafficked to Italy on August 9, 2007 along with two carriers, Tahir Pervez and Sajjad. Tahir returned and was later arrested by the FIA. During questioning, he disclosed that he had sent a cheque in the name of the minister which was en cashed by the minister’s private secretary, Muhammad Ilyas. Ilyas made the confession before the FIA investigators that he handed over the money to the minister.

The minister has denied allegations and said a conspiracy has been hatched against her. She put the blame on one of the staff working for her when she was a parliamentary secretary in the PML-Q government. Nadra officials claim that no changes could be made in the records of Form-B without personal appearance of a registered citizen because the form contains complete information of family members.

Dr Firdous Ashiq said she had sacked Ilyas before this investigation started. She also wondered how a teenager got a passport in the absence of parents. The minister said this whole mess is a glaring example of institutional failure of Nadra, the FIA and other departments.