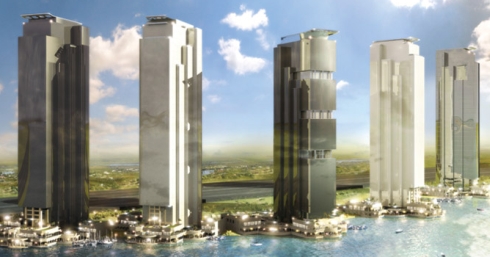 Fake pictures of half-finished buildings in Dubai were distributed to U.K. investors to attract investment in a project that never started. As reported by Heerkani Chohan (not his real name),

“A major property development firm with links to the ruling family of the UAE city-state, and the firm’s marketing agency, are accused by investors, many of whom are UK citizens, of obtaining millions of pounds through the use of false construction photographs…after local and regional media had been alerted to the situation by angry investors, news agencies across the city said they were silenced by senior representatives of the Government of Dubai, as orders were issued for reports of the storm to be pulled.”

Around 500 buyers purchased three towers by paying 428 million pounds to Al Fajer Properties, which is part of the Al Fajer Group, ran by company president Sheikh Maktoum bin Hasher Al Maktoum, brother-in-law to the supreme ruler of Dubai, Sheikh Mohammed bin Rashid Al Maktoum. “But at the weekend it was claimed that Al Fajer Properties and its marketing agent Dynasty Zarooni misled their customers into parting with millions of pounds by presenting photographs showing construction of three buildings, purported to be Ebony 1, Ivory 1 and Ivory 2, up to the sixth storey.

In fact the photographs were of buildings on neighboring plots. Today, the plots on which Ebony 1, Ivory 1 and Ivory 2 are to be built, are empty holes in the ground”.

More details of the scandal are available at Independent