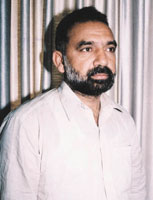 If it were not for the issue of Chief Justice of Pakistan, “Double Shah” affair wouldn’t be gone to back burner so easily. When an issue involves, Rs. 40 billion, its hard to get passed by quietly.

Across Pakistan, its repercussions are still very strong and the issue is yet to be settled, especially in Northern Punjab its as alive as ever. Scams and frauds are everyday happenings in every society, this issue is different in a sense that it has ballooned out in so many directions. It has got some very strikingly interested contrasts.

For some people, he was an outlaw, a ruffian who robbed and cajoled the naive and simple people. For some, he was a kind of Robin hood, who somehow made the poor rich, by doubling their money. Many are of the staunch believe that Pir Sahib had the means, powers and the authority to double their money. In fact Double Shah did double the money of so many people, who came to media and authenticated that they had received their doubled money from Double Shah.

It all started when Sibtul Hasan Shah traveled to Dubai, came back, and doubled his neighbor’s money just in 7 days. The news got out, and people, as everybody seem to have money without working for it, just flocked to get their moneys doubled. Double Shah did doubled the money of lots of people, but the question is that whether he was building his trust to steal a huge sum afterwards, or was he a genuine philanthropist, who wanted everybody rich for doing nothing? 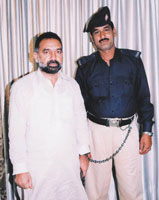 The issue came in the limelight at national and international level when on April 13, 2007 Ghakar police arrested Syed Sibtul Hasan Shah, known as Pir Double Shah, from his Nazimabad house in Rs. 30,000 robbery case registered against him. Double Shah, according to some people had doubled billions of rupees of thousands of people. The people, Double Shah largely affected were from the areas of Gujranwala, Gujrat, Wazirabad, Sialkot and Hafizabad.

Double Shah, was initially a common school teacher. Couple of years ago, he started this business of doubling money and with his genius turned it into a 40-billion venture. Regardless of the issue of his alleged crime, its really amazing to see how a person has managed to capitalize in the largely rural areas of Punjab. He hasn’t even got any MBA or CA from LUMS or IBA. He had built a vast network of offices and sub-offices in many cities, towns and villages. His clients include a wide array of people from every walk of life. Police officers, lawyers, teachers, shop keepers, villagers, farmers, household wives were among his clients.

The law-enforcement agencies and the National Accountability Bureau (NAB) have got registered several cases against Shah with Wazirabad police. They have also recovered Rs 17 million from his residence.

After his arrest, all hell broke loose. As the news of his arrest spread, people from every walk of life started to gather around his house and offices. They even protested vehemently against his arrest. Protesters blocked the roads, lodged complaints in media and police stations. Some thought, the arrest of Double Shah has some political implications and his arrest was largely due to an influential political figure of the area.

As the number of people who were clients of Double Shah fell in thousands, and his popularity was growing rapidly, according to some people, Double Shah was being considered for the next political leader from the area. Just on the day of his arrest, when the shock waves spread through the areas, more than 2000 people surrounded the police station to inquire about what happens to their money and majority of them were and still consider Double Shah an innocent man, who was just helping poor and rich alike. The nephew of Double Shah Intezar Hussein, told a daily newspaper that,” the arrest of a “committed man” like his uncle had shattered the dreams of thousands of people.”

Whatever the facts are, the current situation is that thousands of people are really really worried about their deposits, which they made to Double Shah. The deposits are not some petty cash; their total worth is estimated to be round about the frightening figure of 40 billion rupees. Even Guinness Book is considering entering Double Shah’s name. Double Shah had amassed huge assets in the country and at Dubai during the last one year. Besides hotels, Shah ran a number of casinos in Dubai and 17 petrol and CNG stations in different parts of Punjab.

How exactly Double Shah can double whatever sum is invested with him within 70 days is not known. His brother and front-man Intezar Shah said the business was in collaboration with some Dubai-based partners involved in ‘stocks’ there. People just want their hard-earned money back, but have they realized that how wrong they were to think that they would be getting money without working for it.

13 thoughts on “Double Shah : An Enigma”