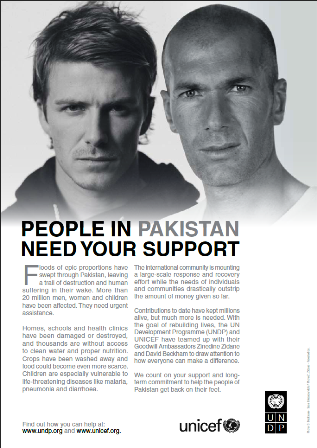 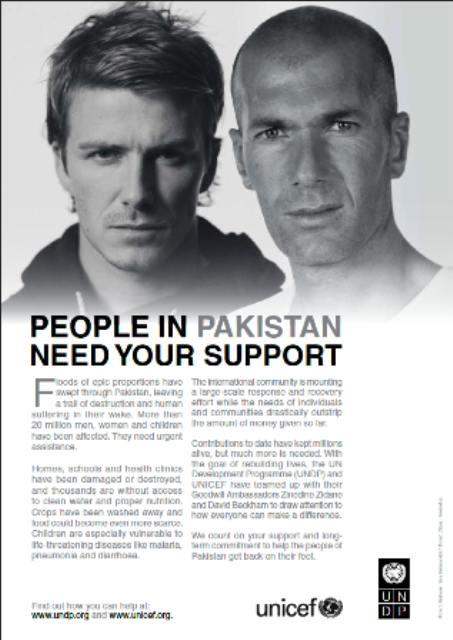 World champion footballers and United Nations Development Programmeâ€™s (UNDP) Goodwill Ambassadors, Cristiano Ronaldo and Zinedine Zidane announced that the 8th Annual Match against Poverty as per the annual schedule of UNDP will channel funds into recovery efforts for the nearly 25 million people affected by the Pakistan floods and Haiti earthquake later this year.

According to official website, UNICEF and UNDP team up with Beckham and Zidane to draw global attention towards helping Pakistani flood victims but the news reports in media are quoting the names of Ronaldo and Zinedine Zidane to play the charity match.

The match will be played on 15 December at the Karaiskakis Stadium in Piraeus, Greece. As in previous years, the Goodwill Ambassadors will mobilize their team from across Europe to take on an all-star team from Olympiacos Football Club in a friendly match as part of the global effort to reduce poverty and achieve the eight Millennium Development Goals (MDGs).

Football’s magic and playerâ€™s stardom will surely be a magnet for the global awareness to support the people and governments of Pakistan and Haiti to recover from the devastating natural disasters which affected them so terribly in 2010 but unfortunately often too quickly forgotten.

UNDP will receive half of the match proceeds which it will dedicate to ongoing recovery efforts in Haiti and Pakistan. Earlier this year, in January, the 7th Annual Match took place in Lisbon, Portugal, where the Zidane/Ronaldo UNDP team took on Benfica, drawing a crowd of 55,000 spectators and raising more than half a million euro (US$767,000) for the people of Haiti.

More than a hundred days into the floods, the situation remains dire for millions of women and children in Pakistan. It is time for us to also think that the disaster is over but not the distress of flood victims and we all should continue to help our brothers and sisters. After all it is not the sole responsibility of UN or the world to help us get through tough times.